Suddenly this whole body politic thing has gotten kind of literal. A couple of weeks ago, the nation's pundits briefly obsessed over whether New Jersey Gov. Chris Christie was too fat to be president, for which they were roundly -- get it? -- chastised by this here. blog. Now, Missouri Sen. Claire McCaskill  is getting body-policed from the other direction. McCaskill recently took off fifty pounds and used Twitter -- cleverly, in our opinion -- as part of her weight-loss plan. She announced to her nearly 60,000 followers in May what her goals were and used the social media tool as a means of holding herself publicly accountable to them. On October 8, McCaskill proudly tweeted that she had reached her goal weight. Thursday in Jezebel, Erin Gloria Ryan declares herself "happy for [McCaskill] for doing what she set out to do," but says that she finds it "depressing that the standard by which women measure our fitness is still the number on a scale." Ryan continues:


It's dismaying that we still feel like we need to announce shamefully to the world when we believe that we have become too large, and then return to proudly tell world when we become tinier, and that we reflexively feel compelled to tell other women when we've noticed that they have shrunk. Stop it, ladies. Stop it right this second.

The headline on the column is, "Can We Please Stop Setting Weight Loss Goals?"

Ryan makes a good point. "Weight alone is not an indicator of health." True. There are plenty of other numbers one ought to consider -- blood pressure, cholesterol, glucose levels -- to get an accurate picture of overall health. It's also true that the kind of public scrutiny of her body that McCaskill invited is a double-edged sword. Such scrutiny and the harsh set of judgments that goes along with it is, as Ryan notes, a major source of the pressure women feel "to become ever smaller."

As you might suspect, however, the Recently Overweight Person of Roxie's World does not find Sen. McCaskill's story of public, socially mediated weight loss depressing or troubling, no matter how much she might agree with aspects of Ryan's analysis. Moose, who at times has used this blog as an embarrassing or inspiring (po-tay-toh, po-tah-toh) public record of her own adventures in re-contouring a middle-aged body, had this to say in response to the story: "60,000 followers? Little Lord Jeebus, I'd kill for 60,000 followers! Apparently, senators are connectivity nodes, whereas English profs are just, um, nerds."

Here's the thing, kids: The number on the scale is one among many numbers you should consider when you are evaluating your health and fitness, but sometimes, you know, losing weight is a reasonable goal, no matter how steeped the culture is in misogyny and fat-shame. If you set your sights on losing weight, you should use whatever tools are available to help you do so. And if you are a woman and a public figure, your body is going to get scrutinized and analyzed and judged every day of your life no matter what you do. (See, for example, Clinton, Hillary Rodham: cankles, cleavage, hair, weight, wrinkles.) We admire Sen. McCaskill for using social media and her status as a public figure to help her achieve a goal and to frame proactively the story of her weight loss rather than soldiering along on her treadmill waiting for the inevitable questions and comments to start. Hers was a risky strategy that could easily have backfired if she hadn't succeeded or if she were less adept in the art of the Twitters. She'd have been labeled a fat old broad trying desperately to look cool. In comments to CBS News, McCaskill shows that she was well aware of the risks but also savvy about how Twitter fits into a postmodern pol's communications strategy -- and her Lifestyle Adjustment Program:


My Twitter account -- I look at it as a way for people in Missouri to see the whole picture. I tweet about my kids. Yesterday, I tweeted about how happy I was that my daughter said she had cleaned her apartment all day. I think it's important for people to see that I've got the same kind of problems and challenges that everybody else does and, obviously, for a woman in her 50s, figuring out how to stay in shape with a really hectic schedule is a big part of everybody's daily struggle in my state and, I think, all across the country. 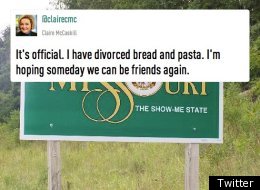 Along the way, McCaskill posted clever tweets about her progress, including a dramatic announcement about having divorced bread and pasta, which inspired her legions of followers to weigh in, as it were, with menu suggestions, advice, and helpful reinforcement. The senator still hopes to rekindle her relationship with carbohydrates, thinking it might work out on an occasional rather than a daily basis as she shifts her focus to maintaining her weight loss.

To which the Recently Overweight Person of Roxie's World replied, in precisely 140 characters:

@clairecmc, I recently broke up w/ potatoes, but carbs, in moderation, CAN fit into a sensible diet. Meet my new pal, butternut squash. Yum!

A hearty PAWS UP to you, Sen. McCaskill. The women of Roxie's World salute your effort, your good humor, and your smart use of social media as a way of sharing your experience and crowd-sourcing the challenges of eating well and getting fit while working hard for the fortunate citizens of the Show-Me State. We wish you well in your ongoing commitment and sincerely hope that Santa brings us a treadmill to aid in our own efforts to balance health with busyness.

What do you think, kids? Are we missing something in not being depressed or concerned by McCaskill's story, blinded by self-interest as we may be on this issue? Is Ryan fair in raining on the parade by harping on the compulsion women (and, sometimes, non-women) feel to publicly declare that they have become too large and then proudly announce that they are thinner, better, healthier people? Is there a way to acknowledge and address that problem without dissing McCaskill -- or, you know, my humble, recently overweight typist?

As always, darlings, we eagerly await and rely upon your wisdom. Meantime, someone is off for a quick run before a meeting and a trip to Baltimore to see a few thousand friends (including, at long last, Tenured Radical, with whom the Moms shall [decadently!] dine this evening). A happy Friday to you and yours. Peace out.
Posted by Roxie Smith Lindemann at 9:43 AM