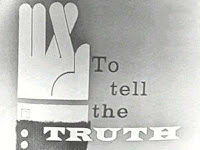 For some reason I feel compelled to remind you today that I am not really a dead dog. You get that, don't you, intelligent reader that you are, but you click back in here regularly, perhaps because you are bored senseless in your cubicle and find some mild amusement in our quirky mix of commentary, sophomoric humor, and randomly appropriated images? You understand, though, that the "I" who speaks here is a Dickinsonian "supposed person" -- er, dead dog -- and not an actual one, right? (We will save for another day -- or blog -- the vexing question of whether any and every speaker is not in some sense a supposed rather than an actual person. That conundrum is way beyond my pay grade.)

Anyhoo, kids, just wanted to clear that up. Truths are being announced or exposed all over the blogosphere this week, and we didn't want anyone to think we were trying to pull the wool over anybody's eyes. We take seriously our blogger's oath to tell the whole truth and nothing but the truth, with stretchers occasionally thrown in when the truth is insufficiently entertaining. We also have strong opinions on the matter of pseudonymity in blogging (enunciated here), and we don't blame readers for getting ticked off when some a$$hat abuses the venerable tradition of writing under a fake name, even if he thinks his cause justifies it. My typist taught Riverbend's Baghdad Burning, the book based on a pseudonymous blog produced in occupied Iraq, in her blogging class, as a way of exploring with students both the power and the ethical complexity of pseudonymity in online worlds. Bloggers and other users of social media are risking their (real) lives to tell the (true) story of events in Iraq, Syria, and elsewhere. For them, pseudonymity is an essential tool aimed at assuring their survival. It's disheartening, to say the least, to see some white straight American guy undermine all that brave work by deciding to pose as a gay Syrian woman as a way to bring attention to issues he felt strongly about. Oh, dude, you so went about it in the wrong way. And you so don't get the difference between an apology and a mansplanation.

So, anyway, as I was saying: I am not a dead dog -- or the living mother of a living child or a gay girl in Damascus. I am just a -- Oh, never mind, my darlings. That is all for now. Carry on.
Posted by Roxie Smith Lindemann at 6:18 PM

Email ThisBlogThis!Share to TwitterShare to FacebookShare to Pinterest
Labels: blogging