Advice from the Big Dawg 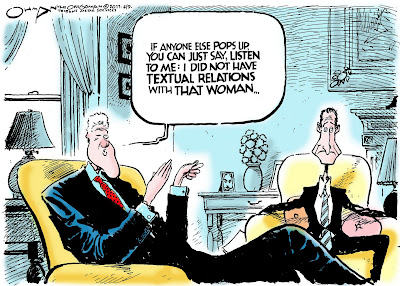 No, darlings, there is nothing at all funny about the ridiculous case of the congressman lost in the Twitterverse, but my typist still chuckled over her WaPo this morning when she saw the above cartoon. The sexual/textual relations joke has been made before. If you google the phrase "I did not have textual relations with that woman," you get tons of hits related to former Detroit mayor Kwame Kilpatrick, who had, among many other moral and legal impairments, a bit of a text-messaging problem. Anyhoo, we like the way the revision of Clinton's famous denial works in this instance, because the cartoon succinctly acknowledges Clinton as patron saint of the modern sex scandal, while marking the shift from what already feels like a remote universe in which what mattered was the biological evidence of sexual activity (the DNA left on Monica Lewinsky's blue dress) to the wacky world of Weiner-gate, in which fools are done in by the merely textual traces they leave of their junk. Have we reached the place where bodies matter only in that they are what we use to produce ourselves as texts -- images and films that we eagerly publish, apparently oblivious to the potential harm, to ourselves and others, that might result from doing so?

Not quite, my pretties. This dead dog is here to tell you that bodies still matter, which might help to explain why we can't let go of Bill Clinton. Love him or hate him, Clinton still reminds us of energies and appetites rooted in the body. They can get us into a world of trouble, those incorrigible desires, but they also make us look and feel and be alive. Clinton survived the humiliation of a politically motivated investigation of his sex life at least in part because, for all his denials and apologies, he never seemed ashamed of the deep passions that got him into such a mess. We loved him for that, even if we deplored what his recklessness did to his wife and his presidency (and, believe me, we were furious with him over both of those things back in 1998). Whatever his failings, Clinton got through his ordeal by relying on a joie de vivre that fueled his determination to stay in office when everyone in Washington had declared him toast. We have a hunch that same joie helped repair the damage he had done to his marriage, though far be it from us to speculate as to why or how Bill and Hill have stuck it out together when so. many. other. political. couples. have fallen apart.

We can't let go of Bill Clinton because we don't want to. Thirteen years after he wagged his finger at us and insisted he hadn't done anything "inappropriate" with Monica Lewinsky, we still need his passion, his resilience, his heart, his Aw, shucks, babe, it's good to be a little bad from time to time, isn't it? spirit. That's why he finds his way into every story about a politician with a self-inflicted junk problem. Clinton owns that story, and we are all still reading it, with bated breath, waiting to see how it ends.

Disclaimer: This post in no way condones or promotes infidelity, meanness, or the photographing of one's private parts. Srsly. Swear to dog. No junk photos, please. Why? We'll let Gina Barreca explain.
Posted by Roxie Smith Lindemann at 5:52 PM