If my typist had the tech skill required to create speech balloons, there'd be one above this photo that said,


Having a swell time in Northampton -- Wish you were here! 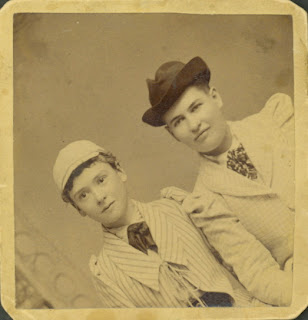 Pardon the radio silence, kids. The moms have been away at Cather Camp for the past several days, making their debut as co-authors and collaborators with a paradigm-shifting (that's academic-speak for, No one in the audience audibly snored) plenary address called "Cather, Dickinson, and Sexuality." The conference was focused on novelist Willa Cather's roots in and connections to the nineteenth century (she was born in 1873), so Moose seized the opportunity to get Goose to pay her back for delivering a paper at last year's Emily Dickinson shindig in Oxford. They did indeed have a swell time hanging out with old and new friends on the bucolic campus of Smith College, which is as crawling with fiercely adorable young dykes as their fevered, middle-aged imaginations had hoped it would be. Moose used the photo above of Cather and her college crush Louise Pound to illustrate a point about how different literary history would look if women's affective and creative relationships were brought into the picture. (Goose had a similar Dickinson image, but we are not at liberty to show that to you yet -- Stay tuned!)

Anyhoo, while Roxie's World was as deserted as the executive suite at Gingrich campaign headquarters, some of our very favorite blog pals were hard at work, making news and waves and paradigm-shifting announcements of their own. We'll toot their horns as a way of getting back to regular programming. Go read 'em, and tell 'em Roxie sent ya.

Paws up to all of our wonderful sister bloggers and to you, our loyal readers, who have been so patient with our sporadic attention lately. It has been and will continue to be a busy summer, but we will do our best to keep you up to date on how the view looks from the ridiculously large backyard of Roxie's World. Peace out, and a sweet summer weekend to you and yours.
Posted by Roxie Smith Lindemann at 2:18 PM