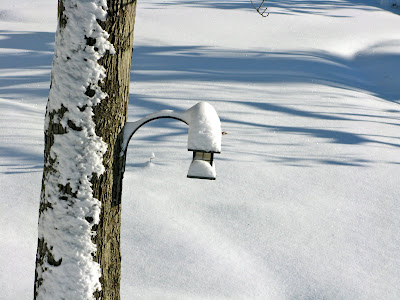 The Knickerbocker record is safe, but we had ourselves a $hitload of snow here in the national capital area over the weekend, kids. At this point, we are way over trying to measure the stuff, though Moose did of course take a stab at that when the storm finally ended late Saturday afternoon. She measured 20 inches up by the house, but it was much deeper out in the remote section of the ridiculously large backyard, which she visited yesterday to check on a stand of Leyland cypresses she planted back in '95. She has always called those trees her "mighty sons" (don't ask me -- it's some cryptic Willa Cather joke, I think), and they seemed to be struggling under the weight of the wet, heavy snow. She borrowed a long window-washing tool from a neighbor to shake some of the snow and ice out of the branches. That's the kind of thing Moose does when she feels anxious about a situation but can't do much to change or improve it. Heaven help us if she starts obsessing about ice dams. Goose might have to summon an army of mighty sons and daughters to restrain her from climbing out on the roof to shovel off snow if that happens.

Goose has been encouraging Moose to take pictures of the storm and its aftermath as a way to keep her safely occupied. Here is a public link to the album she uploaded to Facebook. You can access it even if you are not Moose's friend, even if you are famously Facebook-phobic or Facebook-contemptuous. (Yes, Historiann, that includes you.) It documents the storm from the first flakes on Friday to the start of the big dig-out on Sunday. WaPo has a gallery of photos up that is almost as impressive as Moose's. It's here. Oh, and if you're interested in how DC's famous and powerful are coping with the snow, click here. (Short version, with spoiler: Power couple Andrea Mitchell and Alan Greenspan spent Saturday glued to the TV and their computers, as Greenspan prepped for a scheduled appearance on Meet the Press Sunday morning. Gee, and I would have figured those two crazy kids would have spent a snow day doing unspeakable things on a rug before a roaring fire!)

The storm has had a significant impact on the DC-area chapter of the Aging Sisterhood of Righteous Academic Fem Bloggers. (Sisterhood of the Non-Traveling Laptoppers?) Moose has been reluctant to type for this blog, thinking she needs to conserve hand and shoulder strength for shoveling out the next dump of snow being predicted for Tuesday night. (Five to ten more inches! Good times, people, good times.) Clio Bluestocking finally broke a prolonged blog silence this morning, with photos and a detailed description of her efforts to dig her car out of her apartment building's parking lot. (Clio, baby, we've got shovels! So near and yet so far! Here's hoping the white merlot hasn't run out yet!) Meanwhile, the indefatigable Margaret Soltan of University Diaries has decamped to a hotel on Rockville Pike, because her home in Bethesda has been without power since Friday night. She is back to blogging, though, and wins the prize for most poetic description of the storm:

The snow came down thin and sifty like confectioner’s sugar, but when it finally stopped the whole world was whipped cream.

Moose might have said the whole world was mousse, but, well, she is not a poet and Soltan is, so we'll defer to her. Moose was rather pleased with the FB status line she came up with to go with the photo at the top of this post, which she took first thing Saturday morning: Moose awoke to diamonds, she typed, as the morning sun transformed the ridiculously large backyard into an ocean of tiny sparkles. Nice try, Moose, but don't give up the gig as a lit critter, 'kay?

Meanwhile, inside the house, the moms polished off the last of the baked potato soup last night while watching Super Bowl commercials (H/T June Star) and waiting for Big Love to start. They've got a big box of Clementines to ward off scurvy, plenty of booze, and a bunch of chicken thighs destined to become a hearty but low-fat stew this evening. They've amused themselves by watching basketball and were tickled pink that the Non-Lady Terps used a blizzard of 3-point shots to immobilize the visiting Tar Heels of UNC, handing Coach Roy Williams his worst defeat in ten years. They also caught the premier of HBO's riveting biopic Temple Grandin, with Claire Danes in the title role. Danes is amazing, as are Julia Ormond as Grandin's quietly determined mother and Catherine O'Hara as an empathetic aunt. Directed by Mick Jackson, the film does an exceptional job of showing viewers how Grandin, an autistic, views and experiences the world. It doesn't entirely avoid a narrative of heroic disability, but there is much that is heroic in Grandin's story. More importantly, the film -- and Grandin herself -- asks us to look at autism not so much as a disability as a difference in neurological development and function. Grandin is fortunate in having had strong allies and advocates, but her success as an animal behaviorist and livestock consultant must also be credited to her having made the most of autistic modes of seeing and being. Temple Grandin is a powerful argument in support of neurodiversity.

So, no serious signs of cabin fever so far in Roxie's World, though that could change quickly if water starts pouring out of ceiling lights (meaning that ice dams have started to melt and the water has nowhere else to go because downspouts are frozen solid) or if Tuesday night's storm proves to be as big and awful as some of the predictions are beginning to suggest it might be. The moms will be okay as long as the liquor holds out and the cable stays on, but, hold onto your hats if they can't tune into Damages Wednesday night with a little nip of something to warm their tummies. That just wouldn't be fair . . . or pretty.

Be well, my little snow angels. Tell us how you're holding up and what your strategy is for getting through the next round. Good grief, kids, what shall we call the next one when we haven't even dug out of the last one? How about, Say It Ain't Snow? Leave your suggestions and the tales of your adventures and tribulations in comments.

Cute blue and white guy on the right is Moose's new Facebook doppelganger. Because Roxie's World is firmly committed to seasonally appropriate identity costuming. Peace out.
Posted by Roxie Smith Lindemann at 9:40 AM