The (Gender) Politics of Snow

This Vehicle Liberated by Vagina Power! 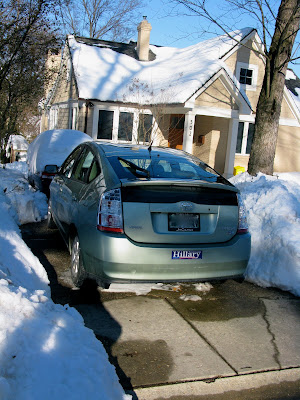 This Path Cleared by
Sistas Shovelin' for Themselves! 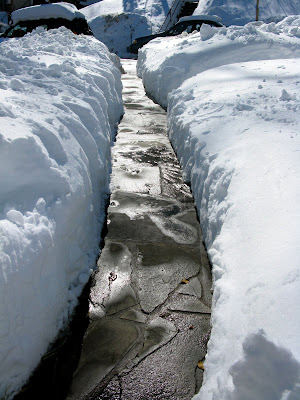 What's up, Rox? you are probably wondering. Somebody wake up on the wrong side of the gender binary? Or maybe cabin fever has settled into the neighborhood, nearly a week after Snowpocalypse II blew into town and not quite 24 hours after Snowpocalypse II, Part B finally shot its wad? Nah, the moms are good, despite having discovered evidence of an ice dam problem on another wall in the house. Moose just felt compelled to offer a broad-shouldered, gynocritical response to an especially dopey column in yesterday's WaPo by Kathleen Parker.

The Post has, of course, been all over the snow story, which is appropriate, given the historic scale of the storm and its significant local and national impact (because the federal government has been shut down for four straight days). WaPo being WaPo, there's even been a look at how the region's leaders, including Maryland Gov. Martin "You, Sir, Are No Jack Kennedy" O'Malley, have negotiated "the politics of snowstorms." Much of the coverage has been great. We've especially enjoyed the photo galleries, but business columnist Steve Pearlstein had a really smart piece on what the response to the storm by cash-strapped state and local authorities says about our broken politics. Here's the money (ha-ha) quote:

It is a measure of the dysfunction of our political system that we can no longer rationally debate whether it is penny-wise and pound-foolish not to spend a little more to try to keep the Capital of the Free World from grinding to a halt every time a snowflake descends from the heavens.

I realize there are lots of problems that cannot be solved just by throwing money at them, but snow removal is not one of them. We have the know-how, we have the technology and we have the money and economic self-interest to do it right. What we don't seem to have is the leadership or political will.

Amen! And then there is Parker's not especially illuminating meditation on what the storm allegedly revealed (or conveniently affirmed) (to Parker) about gender difference. Parker notices how quickly her neighbor, USA Today columnist Craig Wilson, gets out into the storm to do battle with the snow "with his Great Big Snow Shovel." Craig's alacrity is evidence to Parker of a primordial male urge to act in response to a "taunt from Nature." She acknowledges that when she poked her head outside during the epochal storm she saw "many women," presumably also equipped with shovels, clearing sidewalks and unearthing cars. Hmmm. One guy, "many women," all doing exactly the same thing. Sounds like a paradise of gender non-difference, doesn't it? Nope! Not to Parker, who blithely asserts, on the basis of evidence as substantial as a melting snowflake, that "most women do these things because they must, while men apparently can't wait to do them."

We'll pause here so that you can go get your pink or blue barf bag and relieve yourself of that icky burning sensation in the back of your throat.

By the way, Parker also lets us know in the course of her "analysis" that Craig Wilson, who is so hot to go after the snow with his "Great Big Snow Shovel," is gay (he is -- Yay, Craig!), which, I guess, is Parker's way of letting us know that even light-in-the-loafer guys are not immune to the Great Big Manly Urge to subdue Nature, while women -- Ah, well, if I must, I must, I guess, but, really, it would be so much nicer if a big strapping fella would come along and do it for me -- and then if his boyfriend would feed me stroganoff, too, well, that would be just peachy!

We are not making this up, peeps. Feel free to grab that bag again if you need it.

Here's the thing, Ms. Parker. By 10 o'clock this morning, we had had approximately 47 guys come knock on the door and offer to dig out the cars and shovel the walks in Roxie's World. We declined, not because they weren't offering to do it for free and give us stroganoff into the bargain, but because, contrary to what you assert, we actively enjoy doing this kind of work. No, we didn't race out at the height of the storm to catch flakes before they even hit the pavement, and we certainly didn't wield the biggest shovels on the block. Nonetheless, we derive a deep satisfaction in everything associated with shoveling snow: being outdoors, doing work that is physically taxing yet pleasurable, and being a part of the social, communal experience of something like a snowstorm. The work is less about subduing nature than respecting it, figuring out how best to exist in it so that people and property will be safe. A storm is a moment of chaos and uncertainty. The cleanup is a period of checking on things and setting them to rights. And shoveling snow is one of those activities that always has a feeling of play about it, because the cold air makes us giddy and wet clothes make us feel like kids again. As the moms shoveled, a stream of neighbors passed by, and everyone laughed as they exchanged loud greetings and stories about the storm. Such rituals confirm not only our shared participation in a significant event but our membership in a community, our neighborliness.

It wasn't a guy thing, Ms. Parker, it was simply a good thing, and we were delighted to be a part of it. We're sorry to hear that in your neighborhood, which, since we don't know its name, we might as well call Gender Gap, shoveling is for manly men, while the girly girls are stuck indoors. You should come outside sometime and pick up a shovel. You really don't know what you're missing.
Posted by Roxie Smith Lindemann at 5:00 PM