Here is a video capture of Olympic skeleton gold medalist Jon Montgomery taking a happy swig off a pitcher of beer handed to him by a fan moments after his victory last Friday night (2/19) in Vancouver (via): 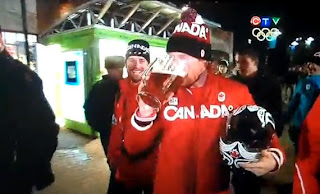 The response to Montgomery's ecstatic, public big gulp from the International Olympic Committee and from Gilbert Felli, the IOC's executive director of the Olympics? Um, well, let's see, I think that response might be roughly summed up as:

And here is one of many photographs taken of the Canadian women's hockey team celebrating its gold-medal victory over the burly girls of the US of A this Thursday night (2/25) (via): 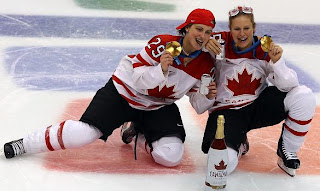 (More pics here. Trust us when we tell you that you want to click on that link.)

The response to a bunch of athletes from, we think, the XX side of the gender fence doing a bit of a chugalug in a moment of unbridled exuberance? Interestingly, that response might be summed up this way:

Well, or that's how we would translate what Felli is reported to have told the Associated Press when he learned that the women's team had gone back on the ice after its win and staged a celebration that included "swigging from bottles of champagne, guzzling beer, and smoking cigars" as well as an attempt by one player to drive the ice re-surfacing machine. Felli told the AP that such behavior was "not what we want to see."

"I don't think it's a good promotion of sport values," he said. "If they celebrate in the changing room, that's one thing, but not in public. We will investigate what happened."

Oh, by all means, Mr. Felli, do send in the gender cops to investigate these violations of female decorum. Ladies, as we all know, do not drink in public. We much prefer for the vagina-equipped to do their tippling behind closed doors, especially when they've just spent the last few hours out on the ice slamming the crap out of a bunch of their stick-wielding sisters. Wouldn't want anyone to get the idea that the delicate creatures have been coarsened by the experience or anything, now would we?

Here's a suggestion, Mr. Felli. Once you get those "centers of excellence" set up, those happy-sounding joints around the world that are going to be "equipped to treat athletes with [disorders of sex development] [sic]," perhaps you can set up special seminars where, say, the certified female figure skaters can teach those insufficiently feminine hockey players how to act like ladies. You know, they can give them tips on binging and purging behind closed doors! Maybe even show them how to smile sweetly when an abusive coach threatens to boot them off the team if they won't put out! I mean, really, Mr. Felli, there's a whole lot more to this gender thing than just assuring that the "women" have all the right parts and just the right chromosomes. They've got to act the part, too, don't they? Because otherwise, you know, you might have to suffer through all kinds of icky stuff you don't want to see.

Girls will be girls, Mr. Felli, but it takes a tough guy like you to make sure, doesn't it?
Posted by Roxie Smith Lindemann at 12:50 PM