"This Moment of June" 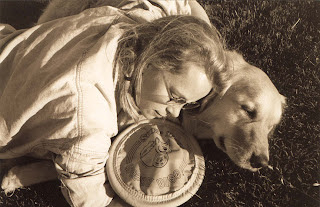 This is going to be a happy post, maybe even a sappy one. If you're looking for snark, click elsewhere, or just sit tight til the New York Times puts Maureen Dowd's column for tomorrow up on its web site. That ought to satisfy your appetite for effete cynicism and shallow political analysis. You'll get none of that in Roxie's World, at least not today.

Why all the glee? It could be the weather. Your nation's capital (oh, dear -- apologies to my legions of loyal international readers for the U. S.-centric reference) is positively glorious today. (How is the weather in Dubai today, anyway? or Slovenia? or Korea? ye cosmopolitan denizens of Roxie's World?) Here, it's warm but not hot, and the humidity is low, the sky a lovely azure. It's the kind of day when an old dog wants to lie on her back in the yard and let the warmth of the sun bake the aches right out of her creaky joints. It's the kind of day when one mom will decide to walk for four miles on the trail rather than three and just grin when a passerby catches her singing out loud with her Nano as the Indigo Girls belt out, "I believe in you and I believe in love." Hours later, the other mother heads out for her own walk and phones home to say that one of the neighbors, who is normally kind of withdrawn and something of a sad sack, is out dancing in his front yard. With another person. It's the kind of day when an English prof pulls Mrs. Dalloway off the shelf because she has to re-visit those lines about a summer morning so deliciously fresh that the vivacious fifty-something protagonist is overwhelmed by the "absurd and faithful passion" of her love for life:

the triumph and the jingle and the strange high singing of some aeroplane overhead was what she loved; life; London; this moment of June.

Or maybe it isn't sappy to affirm one's faith in love, one's reckless love of life itself. Maybe, given the precariousness of both, those are gutsy things to do. We live and die by instants. Do we dare give our hearts away to something that might disappear in the blink of an eye?

On a solstice morning twenty-six years ago, our beloved Goose almost disappeared after a car accident on a winding country road in New Jersey. Alone for seven hours at the bottom of an embankment, she nearly bled to death, yet managed to prop herself up to keep from choking on her own blood until she was finally found. This past Thursday was the summer solstice, and, as it happened, the moms were driving up to the Garden State for a short visit. Moose drove, because Goose is a teensy bit skittish about being behind the wheel on that particular day. About 30 miles from their destination, the sky opened up in a spectacular thunderstorm. Moose has never been in a serious car accident, but she's never been keen on driving in the rain. (Indeed, she's been known to cry during storms while riding in the passenger seat. She is not proud of this obvious evidence of wussiness, but she is an honest woman and so said I could tell you.) In any case, the storm was mercifully brief and Moose managed to maintain her composure as she made her way up the Turnpike. (By some miracle, she found herself surrounded by sensible drivers who slowed to a crawl as torrents of rain fell from the sky.) As suddenly as it began, the storm ended. Out the left side of the car, bright sun emerged. Out the ride side of the car, a magnificent double rainbow appeared, fully visible from one end to the other for a rapturously gazing Goose. Moose drove on through the traffic and the puddles, braving a smile at Goose and a glance or two out the right window.

Perhaps that's why we take the risks of loving people or life or putting our faith in anything. Storms happen -- but so, in an instant, do rainbows.

Hold that thought in your beautiful mind as you click on my music box. Take a listen to Mary Chapin Carpenter's "Why Shouldn't We," from her wonderful new album, The Calling, which is all about love, commitment, and figuring out what you were put on this earth to do -- then doing it. (Click here for Carpenter's contribution to NPR's "This I Believe" series. It's called "The Learning Curve of Gratitude" and is a reflection on Carpenter's recent experience of pulmonary embolism, which forced her to cancel a summer concert tour [for which the moms had tickets] and renewed her appreciation for the fact that "every day is all there is." The essay reminded Moose of why Carpenter has long been on her short list of artists she'd most like to have a beer with.)

Peace out, beloveds.
Posted by Roxie Smith Lindemann at 3:54 PM