On Virtue and Vice 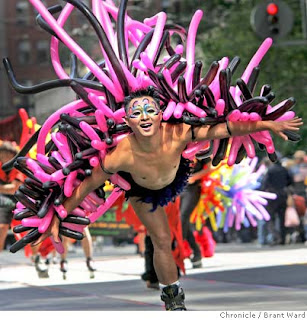 Paws up for Elizabeth Edwards, kids. In San Francisco yesterday for the world's most fabulous gay pride celebration, she did what none of the leading Democratic presidential candidates, including her husband, has had the guts to do: She declared her support for legalized same-sex marriage, saying, simply:

I don't know why somebody else's marriage has anything to do with me. I'm completely comfortable with gay marriage.

To which Roxie's World replies: You go, girl!

Regular readers may have noticed that we've had surprisingly little to say on the subject of marriage here in Roxie's World, though perhaps you figured that every cute reference to my moms and their twenty-three years of queer delight was a not-so-subtle argument in support of marriage equality. Gosh, you might have thought, Roxie's moms are so nice, so normal, so incredibly just like every other white middle-class person I ever met. They have a dog, a house, a hybrid car. They have funny fights about money, time, and what to watch on television. They have never skated down the street with dozens of pink and black balloons attached to their bodies. How can we not let them marry?

If you thought that, you are a really nice person deserving of a big lick on the cheek from Roxie's World, despite your puzzling aversion to public displays of pink and black balloons. Nonetheless, you are missing something important about the marriage debate and my position on it. Of course your favorite dog blogger with the two charming moms is unambiguously in favor of extending the right of civil marriage to same-sex couples, but we cringe whenever the argument is framed in terms of "niceness" and "normalcy." People aren't granted civil rights or the protection of the law because they are nice or normal. They get such things because they are people, and the law does not allow people to be treated differently from one another. Moose is fond of saying that she takes her position on civil rights from the words carved on the frieze of the Supreme Court building: Equal justice under law. It is as simple -- and as deeply, breathtakingly radical -- as that.

Despite the fact that their relationship is probably as close to "marriage" as you can get without a license (and the array of state and federal benefits that go along with that), the moms actually have a fairly fraught position on the issue of marriage. Growing up in the women's movement, they tended to see marriage as part of the problem of patriarchy and not part of the solution. They were proud and happy to be outsiders to an institution that had been so oppressive to women. In more recent years, they've also been strongly sympathetic to the queer critique of marriage as a diversion from the more radical goals of the early gay liberation movement. Snug as they may be in their relational cocoon, they are opposed to the linkage between marriage and the distribution of benefits to which all citizens are entitled. They also celebrate the range of intimacies and relational possibilities that queer cultures have brought into being. They've been more than a little bit influenced by the work of Michael Warner, whose book, The Trouble With Normal, is a compact yet devastating critique of the gay marriage movement.

And yet. . .my moms despise discrimination of any sort, and even though it's really, really manipulative to drag adorable children into political arguments, they hate the fact that their good friend, the Anatomically Obsessed 7-Year Old, lives in a family that is treated differently from other families just because he has two dads rather than one. They are also Marylanders, which means they are on pins and needles right now waiting to see how the state's Court of Appeals is going to rule in a major marriage case. (For details on Conaway v. Deane and Polyak, click here, and then send some bucks to our good friends at Equality Maryland.) They don't know what they'll do if the court agrees with a lower court ruling that the state's ban on same-sex marriage is a form of gender discrimination, but they know they'll be thrilled if the Free State joins the company of other blue states that are moving toward marriage and family equality. Maybe they'll get hitched, and maybe they won't -- but you know your favorite dog blogger will put her paws in the air for a victory for fairness. In support of that goal, we've got our fingers crossed and a new sign out in the yard (get yours here):

Heads Up: Radical Change of Subject

I would be remiss in my duty of informing my readers if I didn't make sure you were all paying very close attention to Wa Po's riveting, terrifying series of articles on Vice President Darth Cheney. It's a four parter by Barton Gellman and Jo Becker that started yesterday. You can access the whole series here, and you should. Even if you already believe that Cheney is the locus of evil in the universe (and you should), the details will stun you. It's a bracing reminder that the mainstream media can still do vitally important work, which is why Roxie's World hereby declares Gellman and Becker our first Watchdogs of the Week.

Posted by Roxie Smith Lindemann at 9:20 AM