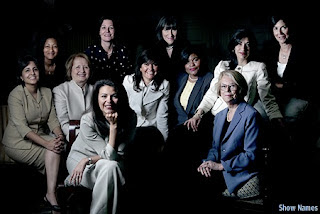 Are you worried that Roxie's World is taking a turn for the crude and anatomical? Are you more worried that, with our third Hillary post in a row, we've abandoned our position of neutrality in the Democratic primary race and are transforming your favorite dog blog into a bastion of mindless Clinton worship?

Relax, kids. The creative team and the political division are closely monitoring the situation and are determined to maintain Roxie's World's high standards of. . .popping off about whatever it is that happens to capture our attention on any given day. We just couldn't resist calling your attention to Lois Romano's terrific piece on Hillary's estrogen-fueled inner circle in this morning's Wa Po. Cynics will argue that Romano got suckered by a team of femi-nazi loyalists looking to humanize a candidate so often perceived as cold and calculating. (Snarky aside to Maureen Dowd: There's your lead for your next column. We'll let you use it for free if you promise to credit Roxie's World.) We say paws up to Romano for calling attention to the talented group of women who form the core of Clinton's campaign team. "Never have so many women operated at such a high level in one campaign," she writes, "working with a discipline and a loyalty and a legendary secrecy rarely seen at this level of American politics." In a couple of spots, Romano acknowledges the downside to the tightness of Clinton's inner circle -- the tendency toward secrecy, insularity, and a certain defensiveness -- but mostly she focuses on the fact that, "among her own staff, [Clinton] has cultivated a nurturing culture of collegiality and loyalty, a leadership style based in teamwork, and often favored by women, that values consensus over hierarchy." Heck, there are even weekly yoga classes at the campaign's Arlington headquarters! How much you wanna bet their periods are all in sync -- well, you know, at least among those who still have periods?

Moose is still chewing on that comment by Jen Moseley, quoted in The Nation piece on Hillary, that being a woman doesn't guarantee women will support Clinton, because "There's no vagina litmus test, people." She appreciates the point. She knows there are plenty of women she would vote against no matter how many birthday parties they threw for their devoted staff members. She also knows that feminism aims to create a truly equitable world in which differences of gender, sex, race, and class would cease to matter. In that world, there would be no need to count vaginas -- or notice skin color or income level -- but we don't yet live in that world or anything remotely like it. That's why a photograph of a group of smart, strong, smiling women working together to make history gives us a goosebump or two over morning coffee. The only way to get that world is to build it, and these poised, determined women look like they'd be pretty handy with the tools of world-building.

Roxie's World says let's give 'em a hammer and see what they can do.
Posted by Roxie Smith Lindemann at 9:08 AM