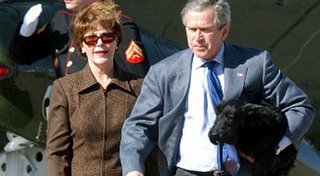 Pity poor Barney, held hostage by the "leader" of the "free" world and his highly medicated wife. (Don't you think Bush looks fat in this picture? Moose and I do. We bet there's a cooler full of beer hidden somewhere in the Oval Office and the "Decider" has been the "Imbiber" lately.)

Pity poor Moose, who has a bad cold and a head that feels like the back wheels of a fully loaded semi have been rolling back and forth across it for the past twenty four hours.

Pity poor ME, because I've got my annual skin allergy to autumn leaves, which means that I've spent an inordinate amount of time licking myself lately rather than blogging. This, I realize, is a huge disappointment to my legions of fans, but bear with us. Y'all should be out knocking on doors for progressive candidates anyway. (Or, if, like Moose, you don't feel like leaving the house this weekend, volunteer for Move On's Call for Change program.)

Pity both me and Moose, who have been without the company of our beloved Goose for almost an entire week! She has been in Texas visiting family and attending a conference, while we have been here sniffing and licking and tinkling on the rugs and eating take-out food and hoping that none of the technology in the household breaks down. We are lonely as clouds and eagerly awaiting her return tomorrow. We took a vote and have decided to revoke her travel privileges, unless, of course, she takes us with her next time to some canine-friendly destination.

And speaking of canine-friendly, here's a wonderful story about the incredible new animal shelter that has just been built by the Washington Animal Rescue League. The idea behind it is that a posh, peaceful environment will help animals recover from trauma and abuse and make them less aggressive, more relaxed, and therefore more adoptable. I am pleased to give the Rescue League a Five-Paw Rating and a Roxie's World Seal of Approval for smart, compassionate plan that is likely to result in healthier animals finding the loving homes they deserve. Hip-hip-HOORAY!

Okay, Moose says it's time to stop typing and get horizontal. The semi is starting to roll over her head again. Ouch!

P.S. Need a little more inspiration for ending the "pity party" of liberal politics in the US? Read this powerful piece by Kevin Tillman, brother of NFL star Pat Tillman, who was killed by friendly fire in Afghanistan in 2004. Kevin calls on fellow citizens to honor Pat by voting for change on November 7--the day after his late brother's birthday. (With thanks to Auntie Faye for pointing out this moving call to action.)
Posted by Roxie Smith Lindemann at 11:18 AM