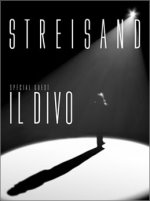 Friday nights are special at our house. Usually, my moms make drinks, and we all curl up on the couch and watch Mark Shields and David Brooks rehash the week in politics on The News Hour. They’ll scratch my neck, rub my ears, and shriek at David Brooks’ lame attempts to justify the latest Republican outrage. Moose will do one of her hilarious imitations of moderator Jim Lehrer interrupting the discussion to ask for clarification of some perfectly obvious point. “When you say that the sun will come up tomorrow,” Moose intones, “you are referring to the large orange object in the sky that appears every morning, correct?” Then we all crack up, and Goose tops off the drinks. It’s a perfect way to spend an evening, in my humble opinion.

Last night was different, though. Last night I had the couch all to myself, as Moose and Goose raced downtown for an early dinner and the big Barbra Streisand concert at the arena formerly known as the MCI Center. Goose bought the tickets, which were obscenely expensive (though most of the money, according to Barbra, is going to very politically correct charities) to indulge Moose in her lifelong admiration for the funny girl with the big voice. That generosity is one of the things we love most about our Goose. She is something of a Streisand fan herself, but she bought the tickets mostly for the pleasure of looking over in the dark and seeing her own funny girl mouthing the words and dancing in her seat with misty eyes. She bought them knowing that at some point during the show Moose would reach for her hand in the dark and give it a squeeze, to thank her for making her one of “the luckiest people in the world.”

Diva worship makes us sentimental, doesn’t it? Or maybe diva worship is all about sentimentality: a potent mixture of desire, nostalgia, identification, and the pure seduction of a big voice that can make every lullaby sound like a Broadway show-stopper—and vice versa. Is that bad? Moose doesn’t think so. She’s been a fan of show tunes and the women who belt them out since she was a little kid watching her parents perform in amateur productions of Little Mary Sunshine, The Fantasticks, and Carousel. As a child of the early 60s, she knew all of the Beatles songs by heart, but she spent at least as much time pretending to be Debbie Reynolds in The Unsinkable Molly Brown and Julie Andrews in The Sound of Music as she did stroking an air guitar and wishing she were John, Paul, George, or Ringo. (Well, she never actually wanted to be Ringo. Back then, he was the dorky Beatle.) The highlight of her older sister’s childhood was getting to go to a Beatles concert, but Moose went to see the film version of Funny Girl with her mom and dad and thought she had glimpsed true genius. (It’s important to note that she was nine years old at the time. Her parents probably took her to the Blue Boar Cafeteria in Louisville before the movie. Then, Moose thought the Blue Boar was the height of culinary achievement, so it's possible that her sense of judgment was not particularly refined at this point. Still, the Blue Boar did put out a fine mac and cheese.)

Moose called her mother at intermission to say that she (Moose) could die happy, having just heard Barbra sing “People” live and in person. She felt a goose bump or two during “The Way We Were,” one of her late father’s favorite songs. One of his many excellent song parodies began with a long, poignant “ma-m-m-m-m-m-aries may be beautiful and yet. . . ."

My moms were on cloud 9 when they got home from the show last night. They marveled that Streisand’s voice is still in excellent shape—sultry in the lower range and pure as a bell in the higher. They were pleased that she looks gorgeous and is confident enough to look her age. No starvation diets or plastic surgeries for this sexy sixty-four year old! She even did a funny recurring bit about her appetite in which she talked about stopping off at several well-known Washington restaurants to eat on her way to the National Gallery, which she wound up not reaching because she had to get back to the theater for her pre-performance dinner. Ha-ha. Moose admires a woman with the guts to acknowledge a hearty appetite.

My solitary Friday night left me to wonder: Is lesbian diva worship the same as gay male diva worship, a camp tradition long acknowledged and widely studied? And what does it mean when two middle-aged dykes indulge in worship of a cult figure usually associated with gay men? This isn’t the first time my moms have crossed over into what might be considered gay male terrain. Goose has had a thing for Dolly Parton for years, and Moose used to love a good drag show—and this was long before the days of drag king shows, mind you. Moose and Goose were by no means the only sisters of Sappho in the crowd to see Barbara last night, so perhaps this phenomenon is more widespread than one might think.

Or perhaps it is the nature and the magic of the diva to activate desires across all the silly little boundaries humans have set up around sex and gender identities, orientations, and expressions. Perhaps the diva commands us to see that every girl and every boy is at least a little bit “funny.” And perhaps we like having to see it.

Strike up the band!
Posted by Roxie Smith Lindemann at 3:11 PM