Winning the War on Terriers 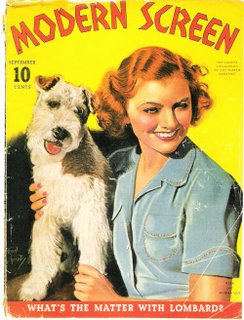 First, I have to apologize to my legions of loyal fans. Roxie's World has been quiet in the last couple of weeks because Moose has been too busy to type for me. She periodically stumbles in the front door to rant and rave about the start of a new semester, but Goose and I haven't seen much of her lately. She seems pretty stressed. Meantime, I am violating Rule #1 of the Blogosphere: Publish regular updates so that your fans won't drift away. I'm here! Don't leave me! It's Moose's fault!

On the other hand, obsessive listeners of The Stephanie Miller Show know that I haven't just been napping or rolling in scat lately. Far from it! I've been getting FAMOUS, and I've won an important victory in the War on Terriers. Fans will recall that in my post of August 31 I chastised progressive talk goddess and dog lover Stephanie Miller for insulting remarks she made about terriers during one of her shows. I won't go over it again because it's too painful, though I will note that it involved the words "small" and "high-strung."

Anyway, my aunt Faye, official radical militant librarian to The Stephanie Miller Show, forwarded the post to Steph and let her know that I and terriers everywhere were not amused by her vicious trafficking in stereotypes and misinformation. On our behalf, Faye demanded an apology. She cleverly suggested that we might forgive Steph if she agreed to mention Roxie's World on the air. Well, folks, I am pleased to report that this past Tuesday (September 12), at the start of the show's third hour, Ms. Stephanie Miller did publicly and sincerely apologize to me and all my terrier friends. She waved a big white flag in the War on Terriers. Plus, she not only mentioned my blog address on the air, she read extensively from the War on Terriers post, totally cracking up executive producer Chris Lavoie with the line about terriers not being high-strung but "just busier than other creatures."

Goose heard it live while she was out doing errands and nearly ran the car off the road when she heard Stephanie mention Roxie's World. Moose missed it. She was snarfing down a bagel in the middle of a busy morning in College Park. Poor, frantic humans.

I would upload an MP3 file of the whole exchange, but that is both illegal and, as far as Moose and I are concerned, impossible to do on Blogger, given our limited technical skills. We suggest that you all subscribe to the podcast of The Stephanie Miller Show, and then you can access it through the archives. Now that Stephanie has surrendered in the War on Terriers, we are proud to re-assume our role as shameless pluggers of her fabulous show. She plugged us. We plug her. That, my humble friends, is how the cycle of fame works.

Terriers, of course, are accustomed to fame, so you needn't worry that this brush with celebrity will go to my head. Naturally, my favorite famous terrier is Asta, the wire-haired fox from The Thin Man movies, but Toto from The Wizard of Oz was a Cairn terrier and Eddie on the TV show Frasier was a Jack Russell. Then there's FDR's famous Scottie, Fala. George Bush has a Scottie, too, but that's just part of his pathetic attempt to imitate strong presidents so it doesn't count. Here's an (incomplete) list of famous terriers for those of you who might wish to enhance your canine cultural literacy (and if you're reading this, surely you must want to do that). We're hoping Ms. Stephanie Miller will take a look at this impressive list the next time she's tempted to disrespect our noble group of breeds.
Posted by Roxie Smith Lindemann at 10:36 AM