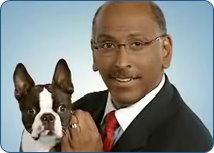 Uh-oh, Friends of Roxie's World. It appears that a new front has opened up in the War on Terriers. Look at how this adorable Boston Terrier is being exploited in a new campaign ad by Maryland's stealth Republican senate candidate, Michael Steele. Steele's ads are clever--light as air, but effective at marketing him as charming and cool, aimed at inoculating him against negative attacks by positioning him as friendly and above the fray.

Fine, Mr. Steele, go ahead and offer yourself up as a pretty piece of non-partisan eye-candy (while relying on big-name Republicans [Bush, Cheney, and Rove] to raise money for you). But if you drag a TERRIER into your slippery business, you risk raising the ire of my legions of fans, who know cruelty to animals and other living things when they see it. Mr. Steele, terriers have no interest in being props in your vapid, slick campaign. Rather than being held in your lap, we'd rather be nipping at your heels or madly barking out the truth about you:

Be a man, Mr. Steele. Let this puppy go, and have the guts to stand on your own--as what you really are.
Posted by Roxie Smith Lindemann at 11:18 PM