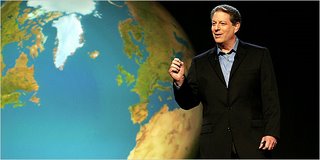 The Al Gore love fest continues, as rave reviews of his new documentary on global warming roll in and citizens with a serious case of voters' remorse suddenly realize that a wonk might have made a better president than a C student after all. Roxie's World endorsed Al for president in 2008 two weeks ago, and we're annoyed with all those cringing Dems who think he'd still be a lousy candidate and that he can be more effective on his issue by staying out of the race than by getting in it. That's a load of scat, and not the kind that's fun to roll in on warm and sultry afternoon. Al can make a serious run as the candidate of passion and principle, the man who sacrificed his own ambition for the good of the country and then dedicated himself to what is arguably the cause that matters more than any other: assuring that the planet will be able to sustain life beyond the next fifteen minutes. Having been screwed by politics as usual and by a highly suspect voting system, Gore can run as the true reformer (as opposed to the fake, self-serving not-much-of-a-reformer, John McCain) and tap into the deep veins of anger and frustration in the American body politic. Further, if he's willing to give it another go, he lets people know there's no need to give up or give in to despair. There's nothing wrong with our system that can't be fixed by what's right in our system, he can credibly say.

I do have my own inconvenient truth to report today, however: My moms started me back on Lasix late last night. We're not happy about it, but I think it was the right thing to do. I've had some shortness of breath recently, and last night at bedtime Moose noticed that my breathing was starting to get labored and shallow again. She went downstairs and wrapped half a tab of Lasix in some liverwurst, and I took it without complaining. No accidents overnight, but I made Goose get up twice to let me out.

It's a funny thing, this business of a broken heart. Some days I'm the same feisty girl I've always been, leaping at the door when Moose proposes an evening walk, even though the air is as thick as an old wool blanket. Some days I'm wobbly on my feet and wheeze just going from Goose's office to the great room. Moose puts her ear on my tummy to listen to my heart and lungs. I would say that's weird, but I know it's just her way of trying to mend my broken heart, and hers.
Posted by Roxie Smith Lindemann at 11:03 AM

Email ThisBlogThis!Share to TwitterShare to FacebookShare to Pinterest
Labels: Al Gore, health, my heart, my moms