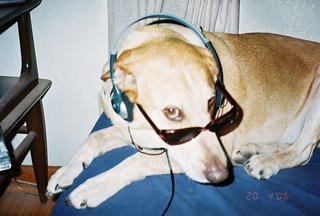 This is my cousin Dylan. He lives in Tulsa with my aunt Faye, dog lover, law librarian, big fan of my blog, and rabid, righteous liberal living at ground zero of Red State World. They stay sane by tuning in to progressive talk genius Stephanie Miller, which is what Dylan is doing in this photo. We heart Steph in our household, too, 'cos she's funny, smart, and great at making up nicknames, such as Puffy McMoonface (Scott McClellan) and Drunky McPukeshoes (Tom DeLay). She also loves dogs. (See my previous post on the sudden death of Steph's beloved Saint Bernard Chester.) Moose says the revolution will not succeed if people can't laugh while they try to change the world, so she is thrilled that Stephanie Miller gets her so tickled every morning that she nearly spits her coffee across the breakfast nook. Her late father, an accountant who wrote dirty parodies of poems and song lyrics when he was in college, taught her that the ability to laugh was the key to surviving all of life's major challenges. He helped Moose to find the laughter in almost any situation, and so she named his cancer "Saddam" when his chemotherapy began in the same week that George Bush's father attacked Iraq back in 1991. Moose and her dad did not agree on many things politically, but they both knew that laughter is good medicine.

Speaking of medicine, today is my third day without Lasix, and I still haven't had any accidents. We're doing the happy dance in my house today!

"Living With War" is of course the title of the new album by Neil Young. It gets a Roxie's World Seal of Approval for responding with passion and artistry to the horrors of an illegal war begun on the basis of a lie. Young is keeping a blog on his website about the war and responses to his album. See http://www.neilyoung.com/
Posted by Roxie Smith Lindemann at 5:08 PM