Give Chance a Piece 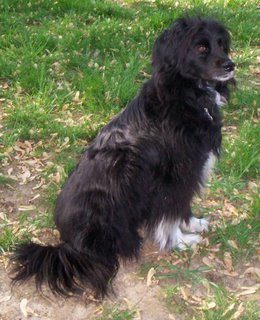 Meet Chance. He's my best friend and Director of Homeland Security for Roxie's World. We met down on my trail several years ago back when he and his moms, Mary Ann and Beth, lived in our neighborhood. (They have since moved to fabulous Riverdale Park.) As you can see from this photo, Chance is a vigilant fellow, always on guard against any kind of threat. Big or little, real or imagined--Chance is ready for it.

Chance's commitment to safety is sometimes misunderstood. I've heard him described as high-strung, even neurotic. It's true that he has a short fuse and an incredibly persistent yap. It's also true that the tussles he and I get into have on occasion drawn blood, but that's no big deal between dogs, no matter how much our moms freak out. Chance is a noble beast. As George Bush might say, I've seen into his soul, and he's got a good heart. He also understands that security is hard work. He's the guy I want guarding my back. Better Chance on the trail, I say, than the National Security Agency on the phone.

Speaking of the NSA, here's Jon Stewart on media responses to the telephone database story. (Moose and I are having fun with our new skill of inserting links into the middle of my blog entries. You can look forward to Roxie's World becoming a more dynamic, free-wheeling place. We're trying to make it, um, bloggier, if that's a word.)

As for "Give Chance a Piece," that's something silly old Moose started singing out on the trail one day when Mary Ann was walking along with treats in her pockets. She gave me one, and Chance was waiting impatiently for his, when all of a sudden Moose started singing, "All we are saying is give Chance a Piece." People are so weird sometimes. That's what my buddy Chance and I think.
Posted by Roxie Smith Lindemann at 3:48 PM