A Gov By Any Other Name

Maryland Governor Martin O'Malley will sign the Civil Marriage Protection Act into law at 5 o'clock this evening, which will make Maryland the eighth state (plus the District of Columbia) to extend marriage rights to same-sex couples. Meanwhile, across the Potomac, Virginia Governor Bob McDonnell has his pen poised to sign a bill that will require women seeking abortions to have merely a jelly-on-the-belly ultrasound rather than the far less happy-sounding transvaginal ultrasound mandated in the original version of the bill. Don't know about y'all, but the vagina-equipped persons of Roxie's World are pretty darn happy to be living in the Free State rather than Old (as in ancient) Virginny right now. I mean, sure, jelly-on-the-belly sounds much more Disney or Dunkin Donut-ish than the Darth Vader-ish transvaginal, but, as our new shero, VA Senator Janet Howell (D-Fairfax), points out, the amended version of the bill still demeans women by subjecting them to a wholly unnecessary procedure. In her judgment, the new bill lowers Virginia's invasion of women's bodies from "state rape" to "state assault." (Is such charged language appropriate for describing the kind of misogynistic $hitstorm raining down on the women of Virginia? We join Shakesville's Melissa McEwan in declaring, thunderingly, that it is.)

Anyhoo, kids, back to the problem of governors and names. As you know, Gov. O'Malley's nom du blog has for quite some time been "You, Sir, Are No Jack Kennedy," which was our clever way of referring to O'Malley's Irish heritage, pretty-boy looks, and boundless ambition. Oh, yes, and a wan neoliberal politics we described as fauxgressive. Yeah, we've been tough on the gov, but he's been tough on us, you know. Remember furloughs, my friends? Of course you do. 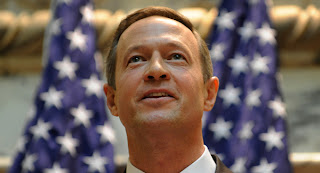 Still, we have to admit that O'Malley impressed us over the course of the fight to get the marriage bill passed. Passing and signing the bill are just the first steps in what is likely to be a long, costly battle, as opponents are already gearing up to get a referendum on the ballot in fall 2012 that would overturn the law before it even goes into effect. We'll see if O'Malley is willing to work as hard to protect the bill as he was to get it passed, but we believe his efforts so far deserve commendation. And that is why, as of today, the governor of the great state of Maryland shall no longer be known in these precincts as You, Sir, Are No Jack Kennedy.

So, now what do we call him? We thought about You, Sir, Are No Bruce Springsteen, which would be a cute dig at the gov's rock-star dreams, but we're trying really hard to avoid snark and, besides, O'Malley and Springsteen are similar in being supporters of marriage equality, so that really doesn't work at all. We could call him You, Sir, Are No Bob McDonnell, but that seems a little too obvious, and we frankly don't want the traffic we would get from Google searches on that odious twit's name. Just writing about transvaginal ultrasounds has already produced bizarre traffic spikes that have the guys down in Clicks and Eyeballs feeling totally creeped out. (Note to searchers: If there is brown liquid coming out of your vagina, you should not be cruising the Interwebs or consulting dead dogs for advice. Seek medical attention immediately.) We blame you for that, Mr. Governor of Vagina Virginia.

Clearly, readers, we need your help. We need a new nickname for the governor of Maryland. He's handsome. Hard-working. Eloquent. Educable. In a committed opposite-sex relationship. Ambitious. A good schmoozer, the Moms learned at an Annapolis reception a few weeks back. What do we call him, now that he's officially a Friend of teh Gayz, a dude who follows through on a big political promise? Leave your suggestions in comments, please. It is, finally, the first day of March, which means the season of celebrations and big spring events in Roxie's World is just around the corner. That means, at a minimum, that my typist needs to get up off her duff and brush her teeth!

A PAWS UP to Maryland for letting a little bit of justice break out today. We hope you'll join us in a happy dance, whether you're the marrying kind or the love-without-license kind. 'Round here, we love all kinds. Peace out.
Posted by Roxie Smith Lindemann at 11:56 AM