Happy St. Patrick's Day from Moose's new iPad, which she got today, not because she camped out for three days but because she quite uncharacteristically planned ahead. She even got the taxpayers of Maryland to buy it for her as an early birthday present. Yep, no money for raises, but plenty for toys essential research tools. We'll let you know soon what she really thinks of it, though so far she's pretty impressed. She's been fiddling around while watching hoops this evening during the Night of a Thousand Upsets. (Poor Duke. Not!)

The Moms head over to the Comcastle early in the a.m. to catch the red hot Lady Terps in first-round action against Navy in the women's tournament. Maybe we'll do some b-ball posting over the weekend, on a machine that's really built for blogging. (Full disclosure: This post was drafted on the iPad but finished on the computer, because Moose couldn't figure out how to embed links or upload photos to Blogger on her fancy new toy tool.) Meantime, here's a sample of what the highly touted camera on the new iPad can do, even in crummy light: 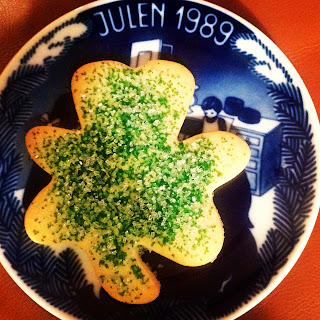 Not bad for a stale shamrock cookie from the co-op, eh? Remember, Goose is only half Irish-ish, so we don't really celebrate. If you do, we hope you have a swell, safe time. Peace out, my little leprechauns, and don't cry if your brackets are busted. Everybody's are, but all that matters is Duke is out (of the non-lady tournament), which means all is half-right in the world. We'll see what happens to the Blue Devils in the women's tournament, though we have a hard time seeing them get past Stanford in the Elite 8. Just remember House Rule #1 of Roxie's World, sports fans: We hate Duke so much that if Duke were playing the Taliban, we would root for the Taliban. Therefore, any team playing Duke is known as the Taliban, and we sit on the couch screaming, "Go, Taliban, go!"

Got it? Go forth and cheer.
Posted by Roxie Smith Lindemann at 11:55 PM