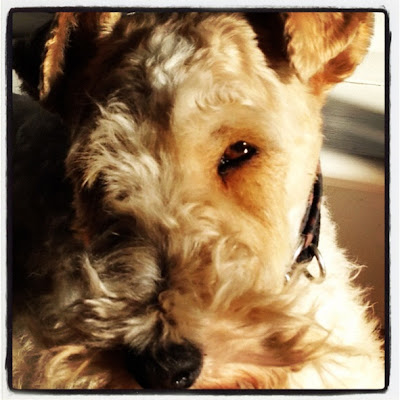 A year ago today Ms. Ruby pranced across the threshold and became the official embodied dog of Roxie's World, ending fourteen months of terrier-free living (if you can call that living) for the Moms and more than three years of confinement in a Missouri puppy mill for one of the sweetest critters on dog's earth. (You can read Ruby's story on the American Fox Terrier Rescue website, and don't worry -- There are no horrifying words or pictures that will ruin your day. If you love dogs, terriers, or this humble blog, you might even consider making a donation to support the work of AFTR. Just a thought. That's what Moose did this morning to celebrate the anniversary of Ruby's adoption.)

A year later I think it's fair to say that Ruby's transition to a pampered life with a pair of besotted humans has gone smoothly. She remains a quiet girl who rarely barks and only occasionally whines. Moose sometimes supposes this behavior is a result of neglect and isolation in her early life. Poor Ruby never learned she could use her voice to command humans and order her world. That, of course, is one reason we've heard relatively little from her here on the blog. In other respects, though, Ruby is remarkably transformed from the skinny critter she was a year ago. Daily exercise and a better diet have bulked her up considerably. Her paw pads, which were soft as a baby's behind when she arrived in Roxie's World, are now thick with callouses. She enjoys walks, but the concept of play is still something of a mystery to her. Unlike me, she won't hang out in the yard by herself for extended periods of time, chasing squirrels, digging holes, and woofing at anything that moves. In the company of a human, however, she will race from one end of the ridiculously large backyard to the other in crazy figure 8s. Moose is trying to capture this delightful activity on film for the pleasure of my readers. Stay tuned.

Not all puppy mill dogs adjust to life after rescue as well as Ms. Ruby has. The emotional scars can last for years. The Moms feel incredibly fortunate that their girl is both trusting and resilient, eager to give and receive love. Which she does, on a daily basis. You can see it, can't you, in the sweet, single brown eye she offers up to the camera in the photo above? You are mine, I am yours, that serene gaze seems to say. This lesson I have learned, happily.

Today we celebrate words that begin with "R": rescue, resilience, recovery, . . . Ruby. A celebration requires a song. How about Aretha Franklin's "Rescue Me," performed by Fontella Bass? Sounds right to me. Sing it, girlfriend. I need you and your love, too. Can't you see that I'm lonely? Peace out, darlings. May you be rescued by love today.

Posted by Roxie Smith Lindemann at 10:12 AM