Offered Without an Iota of Schadenfreude. Not Even a Whiff. OK, Maybe the Tiniest Scintilla, From the Department of There But for the Grace of Photoshop Goes You: 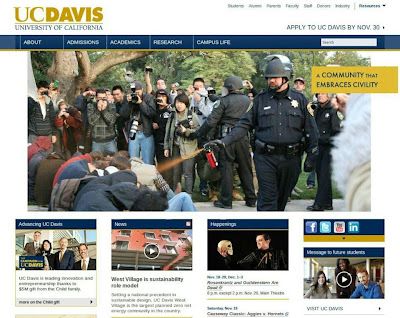 November 2011 seems on track to be the Worst Month Evah for higher ed administrators in the age of Excellence Without Money -- Or Decency. Or, It Appears, a Lick of Sense. First we had the catastrophic failure of leadership in the Penn State intergenerational "horseplay" in the shower scandal. Now the interwebs are on fire with video and commentary on an incident Friday at the University of California, Davis in which campus police in riot gear used pepper spray on students who were peacefully demonstrating in solidarity with Occupy Wall Street. The police were there on orders from Chancellor Linda Katehi, an engineer with impressive hair and, it seems, a bias against tents. No, wait, she has a bias against really bad publicity. Wevs, kids, she does have great hair. We're hoping she also has an up to date CV and a moving van on speed dial, just in case the chorus of calls for her resignation doesn't subside with news of investigations of the incident and suspensions of the spray-happy cops.

As a public service to our readers, we've collected some awesome bits of instant analysis by folks who are much better than we are at figuring things out while they are happening. We consider all of these must-reads for anyone who is wondering if Occupy Education has a serious shot at challenging the profoundly destructive set of values and management principles that have dominated campus administrations in recent years. And isn't that, like, everybody? Click away, dears, and get ready for the revolution. Here's hoping your campus is next -- and that your administrators will rise to rather than fall down upon the occasion.


Below is the video of that long, silent walk, which is as powerful, eerie, and inspiring as others have said it is. Watching it, it's hard not to feel that something truly extraordinary is happening. Young people, who have such cause to lash out in anger, choose instead to summon the righteous power of nonviolence and silence. Katehi walks slowly past them with her elegant coif and her perfectly arranged scarf, her hands gracefully interlocked in front of her, giving her walk of shame something of the look of a perp walk. To her credit, Katehi does not avoid the gazes of the students seated along the edges of the sidewalk. She looks at them. You can imagine them, in the darkness, looking back at her. And in the mutuality of those gazes, you may dare to suppose that something decent might be born: the chance for genuine dialogue, collaboration, and transformation.

At least, that's the way it looks to us, from a few thousand miles away, on the Sunday night before Chancellor Katehi and all those students meet again, in the different light of Monday. Watch the vid and tell us what you see and think and imagine, my darlings. As always, we long to know.

(Here is a longer version of the vid that shows the couple of minutes before Katehi exited the building. The students use the human microphone to arrange the scene and clarify the plan. As the comment passed along by Spivak notes, this version "shows how deliberate and well orchestrated the silence was.")

[Post corrected to reflect that Gayatri Spivak was not the author of a letter previously attributed to her and published on trinketization.]
Posted by Roxie Smith Lindemann at 2:20 PM