Or, Revenge of the Furloughed

On Sunday, WaPo endorsed Maryland Gov. Martin "You, Sir, Are No Jack Kennedy" O'Malley in his rematch with former Gov. Bob "Big Hair" Ehrlich. The editorial praises O'Malley for taking "tough, decisive steps" to close the budget deficits the state faced (thanks in part to Ehrlich) even before the recession seriously depleted revenues. It mildly chastises O'Malley for failing to take action on $33 billion in unfunded pension obligations but sharply criticizes Ehrlich for refusing to say how he would recover a measly $600 million in revenue that would be lost if his (nutty) idea to roll back a 2007 increase in the state's sales tax were to pass.

Let's see, though, what does the endorsement have to say about higher education? And about O'Malley's three years of furloughs (="temporary" pay cuts) for the state's 70,000 employees? I'm sorry, but I didn't hear you. What did the Washington Post endorsement have to say about tuition freezes and budget cuts and three straight years of asking state workers to do more and earn less?

(Please click on that sound file. My typist is banging her head against her laptop in political frustration and won't be able to resume typing for the next little while, so you might as well do something to amuse yourself.)

So, things are looking good for "You, Sir." He snagged the endorsement that eluded him four years ago (when WaPo thought the mayor of Baltimore "had failed to make a persuasive case for toppling a generally proficient incumbent [Ehrlich]"). As we noted here a couple of weeks ago, O'Malley has also opened up an impressive lead over his opponent. Shoot, he'll even have the Big Dawg rallying for him Thursday in Baltimore! Polish up the saxophone, Bill! Here's one Dem who stands a chance of surviving the Screw Hope and Give Me Back My Change tsunami of 2010!

Despite all the happy news, it would appear that O'Malley's March to a second term isn't entirely thrilling the state workers whose pockets he has been picking for the past three years. (Not, I hasten to clarify, that we long for an Ehrlich Restoration, but, well, you know: three. years. of furloughs.) The evidence? Look what showed up in the in-box yesterday -- a photo of the absentee ballot of one of this blog's most faithful readers, a hard-working young QTU prof with a family to support and no patience left for fauxgressive Democrats who don't have the guts or the brains to explain that civilization costs money, fer dog's sake, and things will go better if we ALL pitch in our fair share rather than forcing a few to shoulder the burden for the rest of us! 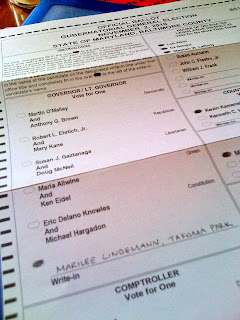 Yes, fellow citizens, our beloved Candy Man has submitted a write-in vote for MOOSE as governor of Maryland! With less than two weeks to go until election day, it's a little late to be launching a campaign, but Moose is so flattered by the idea that she is thinking seriously about giving it a go. I mean, think about it. She is no crazier or less qualified than a lot of the nut jobs that have managed to get on the ballot in this loony election season. She would fix the budget by taxing the rich, booze, and marijuana, which she would decriminalize on her first day in office (H/T Joycelyn Elders!), just as soon as she ordered the state to stop issuing marriage licenses and find other ways to distribute benefits and protections that all citizens should enjoy regardless of their relationship status. She hasn't picked a running mate yet, but he will be pretty and smart and able to eat crabs without making a mess of himself. Goose will make an exceptional First Lady. Her pet project will, of course, be assuring access to high-quality, affordable education. We will call her initiative, um, Excellence With Boatloads of Money. She will travel the state giving her "The Humanities Are Not a Luxury" lecture to watermen and schoolchildren and waitresses who really do say, "Welcome to Bawlmer, hon." Today, at Chesapeake House, the First (I Ain't No) Lady of Maryland explains money, metaphor, and better thinking through poetry! Stop in for a Cinnabon with a side order of truth!

It's pretty to think so, isn't it, darlings? Politics got you down? Worried that the world is succumbing to furloughisme and other forms of short-sighted, destructive cowardice? Sick to death of the major parties but still too ticked off about the 2000 election to vote Green? Write in Moose for governor of Maryland.  Tough times require a tough broad with a sharp tongue and a big heart. Moose: Braver than Martin O'Malley, tall enough to leap over Barbara Mikulski in a single bound, every bit as liberal and very nearly as funny as Al Franken on her best days. Moose: She'll balance the budget and make sure there are no misplaced apostrophes on highway signs. Moose: Because Annapolis isn't quite queer enough.

Vote Moose. It won't be the stupidest thing you've ever done. Peace out, citizens.
Posted by Roxie Smith Lindemann at 9:51 AM