Oh, sleep! It is
a gentle thing,
Beloved from pole to pole.
--Samuel Taylor Coleridge

Goose says she has boring dreams. Often, Moose will roll over in the morning and regale us with the elaborate details of her nocturnal adventures--hilarious work-anxiety dreams, scary unresolved-family-stuff dreams, fleeting glimpses of her late father's tender face, fading echoes of his voice. Goose shakes her head and says, "I dreamed I was in the canned food aisle at Safeway, trying to choose among different brands of tomato sauce."

The other night, though, Goose had an Academy Award-worthy dream. She told me it was okay to share it with my legions of loyal fans because you all know we have been worried about our fish, John, Paul, and George-Ringo, who have endured--we hope--the Washington area's recent snap of very cold weather underneath the thick slab of ice that has formed on their pond in our yard. We've all been concerned, though we know that koi hibernate in winter and that the pond isn't frozen all the way to the bottom.

Anyway, Goose dreamed she had gone down to check on the pond to make sure the water was still flowing. (Pond maintenance is one of Goose's regular chores.) She went and stood on the edge and looked down into the pond. In real life, our pond is about three feet deep and usually clouded by dirt or algae, but the dream pond was crystal clear and unfathomably deep. Not only that, instead of just three fish, the pond was teeming with fish--leaping, iridescent, in varied patterns of orange, white, and black. Goose stood and watched them in joy and admiration. The fish were safe. The spring would come again. 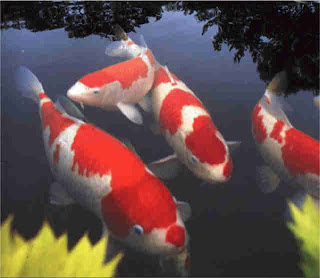 Moose loved this dream. She thinks dreams of water always have great psychic importance and that fish are signs of regeneration, transformation on the deepest levels. She's not sure where she got this idea--possibly from the footnotes to The Waste Land, perhaps from a Celtic folk band she heard in France at the age of seventeen. In any case, the dream made all of us happy and willing to believe that something wonderful was about to happen.

Let's hold that pleasant thought in our minds as we hunker down for the last few weeks of winter. I noted a few other propitious signs this week:

Cheer the turtle, friends! Spring is coming. The moms and I took a three-mile walk today. And everybody knows Dick Cheney is a freeze-dried lunatic. Things are getting better, bit by bit.
Posted by Roxie Smith Lindemann at 10:15 PM