What Would Molly Say? 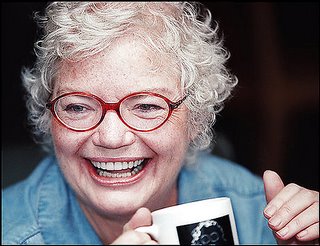 (Photo Credit: Carolyn Mary Bauman, Forth Worth Star-Telegram via AP)

From this day on Roxie's World has an official motto, a motto that nicely captures this blog's spirit of dogged dedication to the cause of justice and comic skewering of the high-falutin' and the high and mighty, not to mention people who are mean to animals or who fail to clean up dog-doo in the park. Our motto, What Would Molly Say?, is a tribute to the late, great, and too soon gone Molly Ivins, Texas populist and rabble-rouser who never met an ego she couldn't knock down to size with a well-turned phrase and who never stopped believing that this wacky, messed-up nation could and would live up to its promises of liberty and justice for all.

I solemnly swear to my legions of loyal fans that Molly's keen eye and irrepressible spirit will live on in some humble way right here in Roxie's World. With every beat of my leaky heart and every tap of Moose's clumsy fingers on the keyboard, I dedicate myself to facing every fresh outrage with a Molly-esque mixture of ferocity and laughter. I call upon you, my loyal fans, to make the same vow, to wake up every morning with Molly's immortal words echoing in your own frail yet fearless hearts:

Keep fighting for freedom and justice, beloveds, but don't forget to have fun doin' it. Lord, let your laughter ring forth. Be outrageous, ridicule the fraidy-cats, rejoice in all the oddities that freedom can produce.

Every time you turn on the news and see that the Bush-leaguers are cranking up the scary talk to justify some new assault on civil liberty, ask yourself: What would Molly say?

Every time you see a reference to intelligence reports purporting to show Iranian involvement in attacks on U. S. soldiers in Iraq or evidence of weapons development, ask yourself: What would Molly say?

Every time you think about the government's massive failure first to protect and then to re-build the areas damaged by Hurricane Katrina, ask yourself: What would Molly say?

Every time Karl Rove or Dick Cheney or George Bush opens his mouth and some new lie pops out, ask yourself: What would Molly say?

And then, dammit, say it, because it needs saying--over and over, every day, for how ever many days you have left on this sweet, fragile earth. Say it, because you're here and she's not. Say it, because not saying it will pinch your spirit and threaten your sanity. Say it, with a smile on your face and the fire of determination burning in your belly. Say it, and then get up tomorrow and say it again.

Here are some wonderful tributes to Molly, from columnist E. J. Dionne, author Maya Angelou, and her good friends and co-conspirators from The Nation. Read them. Weep, laugh, and then get up off your butt and do something. Molly wouldn't have it any other way.

Update: Moose and Goose are still taking Molly's death pretty hard, so they wanted me to add in a few more tribute links. Here's one to Molly's second-to-the-last column, in which she vows to write against the war in every single column until we find a way to end it. Here is New York Times columnist Paul Krugman's piece that documents Molly's prescience about the disasters that would likely follow a U. S. invasion of Iraq. (We like this one because part of Krugman's point is to show that Molly wasn't merely funny. She was also damn smart.) Finally, here is the virtual memorial service being hosted by Molly's friends and colleagues at the Texas Observer. You'll need a hankie or three to make it through this one, but it's worth the effort.

Posted by Roxie Smith Lindemann at 8:54 AM