Tempting as it is to try to bring eyeballs to Roxie's World by continuing to take potshots at public figures like lesbo vice-presidential daughter Mary Cheney or by making fart jokes, I know that my fans expect more of me. I am a dog, after all, not some snarky 23-year old blogging in his boxer shorts (though my typist often works in her bathrobe, it is true). We don't go for the lowest common denominator here at Roxie's World, and we don't engage in gratuitous personal attacks. We point out hypocrisy and meanness among the privileged and the powerful and cruelty to animals whenever and wherever we see it. The only serious grudge we have is against the basketball teams of Duke University, and there we do confess to harboring deep-seated vitriolic hatred. Devoted fans know the policy of our household: If Duke were playing the Taliban, we'd root for the Taliban. Thus, we refer to any team playing Duke as the Taliban and all gather in the great room to scream "Go, Taliban, go!" anytime Duke is on TV. We can't help it. We're Maryland fans.

I digress. The point is that Roxie's World will not become a forum for bashing Mary Cheney, even though that is a lot of fun and we think she deserves it. It's hard to restrain ourselves from making holiday-themed jokes about the pregnant virgin Mary or publicly calling on Mary and her partner to consider moving to Canada, where she and Heather could legally wed and both moms could have equal legal rights to the child they are bringing into the world. (Canada wisely decided this week not to re-open the same-sex marriage question. Parliament voted down an effort to reinstate "traditional" definitions of marriage through legislation three years after Canada's supreme court ruled gays had the right to wed.) And it's really impossible to resist putting in a couple of links to Ruth Marcus's excellent column in the Post on the subject of Cheney's pregnancy and to Tom Toles's spot-on cartoon on the subject. Nonetheless, we shall restrain ourselves and not cynically endeavor to optimize our search engine placement by filling Roxie's World with hot-button keywords like Mary Cheney, lesbian motherhood, Republican sexual hypocrisy, and right-wing nuts go after veep for undermining "traditional" "family" "values."

Instead, we'll help you with your holiday shopping. 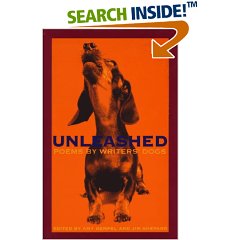 Here is a wonderful book for the dog lover and the lit critter on your shopping list. (A shout out to my Auntie Faye, the Official Radical Militant Librarian of Roxie's World and the Stephanie Miller Show, for sending me this book.) Unleashed is co-edited by Amy Hempel and Jim Shepard and is a collection of poems by writers' dogs. No, I am not among the canine versifiers included in this marvelous collection, but don't get your knickers in a wad. The book was originally published in 1995, which was several years before I started writing.

My heart broke for you.
I nudged your face while you called my
name over and over and
cried no until there was no sound.
You couldn't feel it.

Strange seeing your own
body lying on the grass. My
eyes were slits, my ears
black triangles. And my long legs
were tan and smooth as

polished oak. Not moving. You were
desperate, so I
gave you butterflies, the symbol
of the soul and of
rebirth. I prompted Kim to buy

a book of butterflies, gemlike,
the microscopic
photographs, you said, dazzled you.
I got Max to grab
that tablecloth her mother made
embroidered in thread
with seven butterflies. Andy
made a cloth and wood
dog you used to show me. Yes, I
knew the dog was me.

Butterlies weaved into the silk
were rust-brown like me,
and iridescent. I was in
the canyon when a
butterfly followed

you along the creek where you found
my stone. And I watched
you press your cheek against the words
you had Kris sandblast:
BELL we will discuss butterflies.

I think this poem makes Moose cry because she doesn't believe in ghosts or angels, but she knows that dog is love and that someday when I am gone my love will find her and try to make her feel better.

Posted by Roxie Smith Lindemann at 10:07 AM