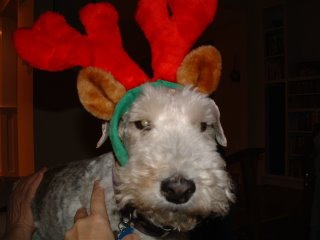 We dogs do wonder about you humans. Don't get me wrong. We know that you love us, and lord knows we love you. You feed us and rub our tummies and talk to us in goofy voices. You pull ticks off of us and towel us off when we come in from the rain. You rub our ears and tell us your troubles, as if we were bartenders or priests, and we take your secrets with us to our graves. It's a good thing for the most part, this companion species bargain we've struck with you. But what's up with the silly holiday costumes? Come to think of it, what's up with the silly holidays? Oh, well, anything to keep the fans happy. Here's a photo of me in my Christmas get-up. Go ahead. Print it out. Put it on your fridge. You know you want to.

The truth is, my moms haven't pulled the reindeer tiara out of the Christmas box yet this year. Our house looks about as festive as Karl Rove's office on the morning of November 8. It's partly that the moms have been preoccupied with the end of the semester, but they're also kind of disgusted with the whole tawdry spectacle. For the past couple of years, when asked what she wants for Christmas, Moose has replied, "World peace and the re-building of the Gulf Coast." She means it. Moose has always considered herself a member of the club described in an interesting piece by Randy Kennedy in last Sunday's New York Times, the "Atheists Who Kind of Don’t Object to Christmas Club." She likes cookies and celebrations and trees festooned with brightly colored lights as much as the next person and has never felt that such rituals had much to do with believing in the divinity of Jesus. "O Holy Night" is one of her favorite songs, particularly the version done by Rickie Lee Jones with the Chieftans, but she doesn't believe a word of it.

Still, Moose hasn't caught even her modified version of the Christmas spirit yet this year. She'll sometimes stand in front of the house trying to figure out how to make a peace sign out of lights for the front windows. She's consulted with Goose on the subject and tried several Google searches, but the front of the house is bare. She hasn't even gotten the extensive collection of Danbury Mint ornaments her mother has given her over the years out and up on the mantle.

I think the war has got her down. And Republican meanness. She can't stand that cheesy little interview the Bushes did with People magazine, where the prez disingenuated (also ought to be a word--and Bush probably thinks it is) on the subject of Mary Cheney's pregnancy and Laura made nasty little digs about Condoleezza Rice's marital status as an impediment to any presidential ambitions she might harbor. It apparently takes a village to run for president and Condi has spent so much time tending the village idiot in the White House for the past six years that she's neglected to have a life. Or so sweet Laura implies.

On a happier note: Roxie's World has made its first appearance ever on anybody's Best of anything list! This being our very first turn into a new year in the blogosphere, we are honored indeed that our pal Damion, the Official Ex-Smoker of Roxie's World and the genuis behind Queering the Apparatus, has given us his "Political/ Sports/ Canine/ Newcomer Award." We know that competition in this category must have been exceptionally keen, and we are grateful to Damion for the faith in us this award shows and shall always endeavor to be worthy of it, though we bow humbly before the awesome example of QTA's stunning mixture of wit, queer theory, and snarky/rapturous/spot-on film commentary. Get over there now, fans. I'm going to take Moose to bed and see if she wakes up in a cheerier mood tomorrow. She better, because she and Goose are going to pick up the new Prius in the morning. Photos to follow soon!
Posted by Roxie Smith Lindemann at 10:43 PM

Email ThisBlogThis!Share to TwitterShare to FacebookShare to Pinterest
Labels: animals and humans, holidays, Mary Cheney, my moms, pictures of me, Shrub