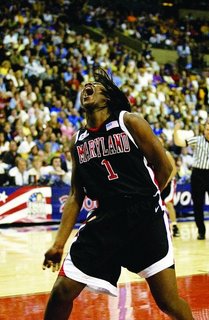 You bet they played like terriers, the mighty women of Maryland, who beat the #1-ranked women of UNC last night to advance to the finals of the NCAA Championship. My moms and my queer brother Geoffrey were screaming and eating enchiladas and praying that Kristi Toliver's 12 turnovers would not cost our girls a trip to the final. Fortunately, her awesome defense against Drama Queen Ivory Latta more than made up for the turnovers, and the Terps held on for a 81-70 win. They are awesome women--prodigiously talented and too young to be intimidated by rankings and the whole Final Four scene. They all play off Maryland's "Rodney Dangerfield" stance--"We don't get no respect, but we kick everybody's asses anyway."

I have to give credit to Moose for the phrase "prodigiously talented." She loves the word "prodigiously." I also have to credit Peter J. Casey of The Diamondback (U of Maryland's student newspaper) for the awesome photo of a prodigiously happy Crystal Langhorne, caught screaming after teammate Laura Harper was fouled late in the game. Laura made her free throws, and she and Crystal combined forces for 47 points in the paint. They were unstoppable, and they put the Heels on their heels. And now, they get to play for the national frickin' championship. (Moose also taught me the word "frickin'." She says it supplies the same satisfaction as other, less socially acceptable words, and in middle age she's learned that sometime a girl just has to capitulate to the powers of social opprobrium.)

Tune in to ESPN Tuesday night at 8:30 for Maryland versus Duke. The part of the Taliban will be played by the cutest, toughest bunch of kick-ass girls the game has ever seen. Brenda Frese will be there with her orange hair, her incredibly off-kilter clothes from Talbot's--and her prodigious talents as a coach. My moms think you should be there, too. Fear the Turtle. Cheer the Turtle. QUEER the Turtle, baby. ;)
Posted by Roxie Smith Lindemann at 10:16 PM