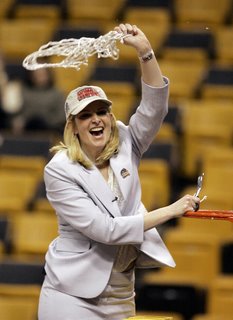 Basketball season is over, and soon I'll move on to new topics--such as why dogs would never have gotten bogged down in Iraq or why humans fail to appreciate the enduring pleasure of rolling around in scat. (Or do they? Someone should ask Donald Rumsfeld that.) Before I leave the subject of basketball and the sheer delight of the Terp women's triumph on Tuesday, I should say a word or two about their prodigiously talented alpha-dog of a coach, Brenda Frese.

Frese is the perfect alpha-dog, especially for a bunch of exuberant young pups such as the team she had this year. You can see from across the court that she is a fierce competitor who is totally in command of her players. She barks an order, and they are quick to comply. At the same time, you can see that she combines firm discipline with great respect and deep affection for her players. Her bark is never a scream, and you know that she would never abuse or humiliate a player in some misguided attempt to "teach" her a lesson. She knows when to use a short leash and when to use a long one. Her players have responded beautifully to her blend of discipline and non-punishment. They like their coach and they like one another, and they haven't lost sight of the fact that basketball is a game. For all the hard work, they usually seem to be having a whole lot of fun on the court. They respect Frese's judgment and her knowledge of the game, but they also have extraordinary confidence in their own abilities and decision-making. Thus Kristi Toliver could decide in the heat of the moment to change an orchestrated play and throw up a game-saving shot with less than ten seconds left on the clock because "big time players want the ball in big time situations. So I wanted to take the shot. . . .[A]s soon as it left my hands, I knew it was going in."

Moose says good teachers know how to make their students work hard and have fun as they develop their skills and self-confidence. She says Brenda Frese is one of the greatest teachers she's ever seen. I say I wish I'd had Coach B in obedience school instead of that mean old alpha nazi who put her hand around my throat and said "bite or breathe" when I got a little snappy one night when she was trying to teach me the "down" command.

My moms made a sign that they took to the games this season that says, "Fear the Brenda." It's a good line, but only the Terps' opponents need fear Coach Frese. The rest of us are just smiling and cheering her on.