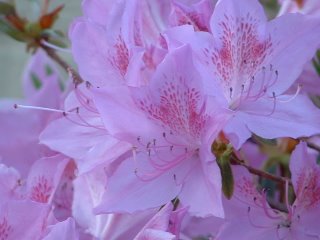 After yesterday's sad post about Chester, Moose thought we should spread some good cheer with this pretty picture of the grand old azalea in our front yard. It hugs the front corner of our house and treats us to a couple of weeks of glorious color every season. Takoma Park is called Azalea City, and some yards are packed full of bushes exploding in day-glo colors. Moose loves that, though some serious gardeners turn up their noses at such showiness. Moose is not a serious gardener. She calls our yard the Darwin garden, because it's pretty much survival of the fittest out there. She will occasionally go out with a rake and a great deal of resolution about cleaning things up, but mother nature definitely has the edge on her. Goose waits patiently until she comes back into the house with muddy shoes and a sore back, and then she says, "Let's hire somebody to take care of this." Moose plops down on the couch with a big glass of water and mutters, "Sure. Call them."

Today is a cool, cloudy day. I would say it's been "raining cats and dogs," but that's another one of those weird human expressions that make no sense to me. It's been raining a lot, but I don't think animals had anything to do with it.
Posted by Roxie Smith Lindemann at 1:16 PM

Email ThisBlogThis!Share to TwitterShare to FacebookShare to Pinterest
Labels: my moms, weather