The Wizard of Odd 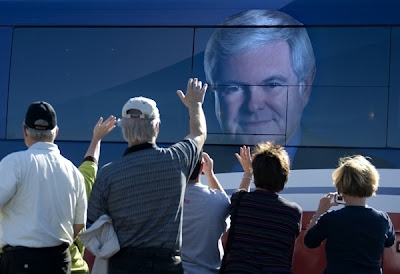 He does look a little wizard-ish, doesn't he, all smiling and soft-eyed and puffed up even larger than he is in his natural state? And those hand-waving Floridians make perfect Munchkins, standing there in the bright sunshine as the balloon lifts gently away from Earth bus pulls away.

Oh, good lord, will it never end, this campaign from Hades? Apparently not.

Gingrich, who, he keeps telling us, is the Smartest Man in the Universe, dreams lofty dreams of Lincoln-Douglas style debates with the brainy fellow he seeks to replace.

Meanwhile, out by the bus, here's a toxic little snippet, from Stephanie McCrummen's report in WaPo, of what Gingrich's followers appear to want:

No dog whistles or secret decoder rings needed to figure out the basis of Gingrich's populist appeal, eh? Of course, the diabolical genius of the former Speaker of the House is that he has the audacity to promote himself as the Smartest Man Alive while tapping into the basest political emotions: racial resentment rooted in ignorance and economic insecurity. That's what he's doing every time he refers to Obama as a food stamp president, which writer Walter Mosely rightly describes as an example of Gingrich's "poetry of hate."

It is poetry, yes, but it is poetry that sickens the soul. One can only hope that the author of such despicable poetry will board his well-appointed bus for nowhere soon and leave us to ponder why we tolerated him in our midst for so long.

Happy Monday, darlings. Wake this dead dog when it's over, will you?
Posted by Roxie Smith Lindemann at 10:56 AM