Gay Action Figures of the Week

Why? Because, dahlings, the moms have gone Hollywood (read all the way to the end of that link or you won't get the cryptic allusion), and so we care deeply about profoundly superficial things like the Golden Globe Awards and the silly, sardonic, or sentimental speeches actors make when they win them. And because Glee is the queerest thing on TV ever, the best excuse we've found yet -- and, trust me, we are always looking -- for spending Tuesday nights on the couch belting out big songs.

At the Globes this past Sunday evening, Colfer and Lynch ran the table in the Best Supporting category for their performances on the show as, respectively, Kurt Hummel, the brave, tender faggot with the gorgeous counter-tenor voice, and Sue Sylvester, the ambiguously gay cheerleading coach whose diabolical machinations are often as close as the show gets to having a plot.

Lynch, shown at left (via) at the awards show with the woman she wed last summer, Dr. Lara Embry, picks up a bonus Gay Action Figure of the Week for her acceptance speech, which was a funny send-up of the winner's obligatory performance of false modesty that ended with an utterly unselfconscious shout-out to "my wife Lara" and their two children. Oh, Jane, you are so suave, so splendid, so deft with the deadpan line and look. You make tall girls everywhere want to square their shoulders and stride gleefully across the stages of their lives. We would dream of gay-marrying you if you -- and, oh yeah, we -- weren't already taken.

Meanwhile, the luminous Colfer, at left (via), whose character's torment at the hands of a homophobic/gay-panicked bully has sparked tears and motherly/teacherly fantasies of rescue over the course of this season, was poised, eloquent, and fierce in accepting his award. He opened with a quip about having dropped his heart "somewhere between Natalie Portman and Julianne Moore" and ended with his own very special shout-out:


Most importantly, to all the amazing kids that watch our show and the kids that our show celebrates who are constantly told no by the people in their environments, by bullies at school that they can’t be who they are or have what they want because of who they are. Well [pause, wave trophy in air], screw that, kids! Thank you [exit smiling].

Yes, my pretties, we understand that visibility in pop culture is fairly low on the totem pole of queer political aspirations (or maybe it isn't -- guess that depends on the queer, doesn't it?). Still, we feel moved to celebrate these proud, public actions by Lynch and Colfer as modest yet significant contributions to the cause. There are still stunningly few openly gay actors in Hollywood, so Colfer in particular, at the ripe old age of 20, is to be commended for beginning his career by being unabashedly out and vocal on issues of importance to the community. 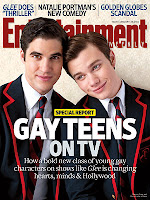 And Glee, for all its flaws (and we admit there are some), deserves its own bit of commendation for its commitment to queer plots and characters and for the extraordinarily good timing of its attention to bullying. (Oh, and that EW there on the left, with Colfer and the adorable Darren Chriss on the cover, should be on newsstands now.) We may be biased, but we think the show is at its best when it focuses on Kurt's proud yet uncertain efforts to grow up gay and strong. We are genuinely conflicted about who sings the best (Kurt? Rachel? Rachel? Kurt? Mercedes? Rachel?), but Kurt's stories win hands down for their emotional texture and their potent political force. Colfer's pitch-perfect performance makes the character's dignity and vulnerability so clear that the audience can't not root for him. We want a world in which Kurt can thrive. We want to hold his hand and try, together, to bring that world into being. Don't we? Yes, Kurt, we do. We want to hold your hand, too. Peace out.