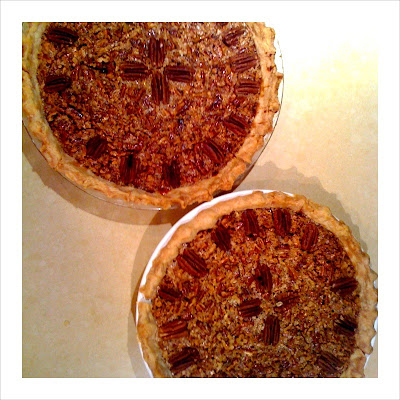 Happy Thanksgiving, darlings! Thanks for popping in to share a small slice of your holiday with your pals in Roxie's World. We hope that you are settled in for a happy day of feasting and fun. We are. The out-of-towners (the older Moosian siblings and their straight-married spouses) arrived yesterday without overly zealous government frisking. (They drove.) The sweet potato and carrot soup has been made, without a repeat of last year's unfortunate blender malfunction that resulted in hot soup exploding all over the stove, countertop, floor, and, um, Moose. A large batch of grandmother Janie's olives is chilling out on the porch, ready and waiting for cocktail hour. The superb cranberry chutney is in the fridge, jacked up with an extra half cup of port, thanks to Moose's poor skill with numbers. (She was increasing the recipe by half and ended up doubling the amount of port. Oopsy doopsy, darlings! What's a girl to do?) The bird is brining quietly in the cooler.

And the pecan pies pictured above are snuggled up next to the apple and pumpkin pies that the guests brought for the dessert extravaganza destined to precede the traditional post-prandial screening of Best in Show.

Y'all know the moms are pretty good cooks. They are not, as a rule, big bakers, but come holiday time Moose becomes a pie chef, because the ritual requires it. She embraces the role with joy, reveling in the opportunity to plunge her hands into flour and the deep culinary herstory that pie-making carries with it. The Mother of the Moosians (who will celebrate Thanksgiving with the family of her oldest grandchild today) was a mighty fine pie-maker in her day, so fine in fact that the cousins of Moose's generation called her "Aunt Pie" instead of "Aunt Pat." For decades, Moose avoiding pie-making because she was sure she could never make a crust as light and flaky and perfect as the ones her mom would make. So now, when she takes up the task at Thanksgiving, she spends those happy moments lightly mixing the flour and the Crisco doing her best to summon up her mother's sure, delicate touch.

Moose and Goose are partial to pecan pies. The recipe they use is a version of the delicious pies Goose's Aunt Inelle whipped up for the family gatherings of Goose's Texas girlhood. The mother of the Goosians shared the recipe with Moose one Christmas when the moms were in Austin. "Inelle always added a couple of tablespoons of bourbon to her pies," Mozelle explained to Moose with a twinkle in her eye. Which means, of course, that every year when Moose pulls the bourbon out of the liquor cabinet during pie-making, she pauses to send up a good thought in memory of Aunt Inelle. And this year, she paused to note that this was the first Thanksgiving in twenty-six years that she wouldn't have a holiday phone call with her beloved mother-out-law.

Ah, there it is: the poignant side of the holidays -- that moment in the midst of the celebration when we pause to reflect upon who is not at the table, who will not walk in the door and wrap us in a bear hug, who will not wag a tail in eager anticipation of a morsel of turkey that just might fall to the floor.

Set on the middle rack of the oven and bake for one hour.

Remove from oven and let cool to room temperature before serving.

Note: The Silver Palate recipe calls for starting the pie at 450 degrees for ten minutes and then lowering the temperature to 325 for another 25-30 minutes, which makes the pie more candy-like. Moose prefers the softer pie that results from longer baking at a lower temperature.

Posted by Roxie Smith Lindemann at 10:07 AM