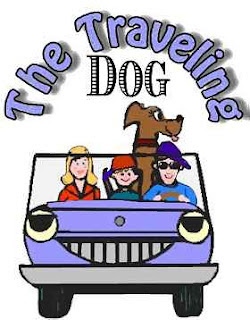 The moms and I have hit the road for this Thanksgiving. Here is our collaboratively generated list of things we are thankful for this holiday season, produced in the Freehold, NJ offices of RW Enterprises, LLC.

The United States Bridge Federation has dropped its effort to punish six members of the women’s championship bridge team for holding up a sign that said “We did not vote for Bush” during an awards ceremony last month in Shanghai. Paws up for free speech!

On the Internets nobody knows you’ve lost your hearing and are so stiff in the joints that you can’t jump up on the couch anymore. You are always a spry young pup racing through the ridiculously large backyard in leaps and bounds.

Maureen Dowd only publishes two columns a week, which means she only has two opportunities to subject us to attacks on Hillary Clinton that are shallower and nastier every time she sits down at her computer. Memo to Mo Do: Have two slices of pie today, and look up the word "dynasty" in the dictionary. Trust us, you will not see a picture of the Clinton or Rodham families there.

Our beloved Lady Terps look so happy and fluid and fierce on the court this season that they seem prepared and determined to win another national title, even if they have to deliver Coach B’s babies at halftime.

Joss Whedon (of Buffy the Vampire fame) returns to series television with a new Fox series called Dollhouse starring Eliza Dushku. This item is on the list because we are spending Thanksgiving with old friends in New Jersey whom we’ll call June Star and the Man Formerly Known as Michael. June Star is a major Buffy fan and a backstage consultant to the creative team here in Roxie’s World.

Showtime’s Weeds has for the most part continued not to suck as it moves through its third season. We haven’t seen this week’s episode yet, but we’re happy that Nancy and Conrad have consummated their smoldering desire for one another and that the show has shifted back to a comic mode focused more on its wonderful characters rather than a melodramatic one focused on the seamy underside of the drug world.

Alberto Gonzalez is out of a job and Al Gore won a Nobel Prize for his extraordinary work raising the world’s consciousness about the threat of global climate change.

The situation in Iraq has shown signs of marginal improvement, but the country’s political apparatus still seems paralyzed and the U.S. seems clueless about how to leave, why to stay, and what to do to move the political process ahead.

The field of Republican presidential candidates, even without Darth Cheney, is so scary and unattractive that Democrats could, as Moose is fond of saying, run, um, poop on toast and likely come away with a victory.

On the other hand, the field of Democratic candidates is strong and appealing. My progressive pals need to remember that as the race heats up and the mud starts flying as candidates try to distinguish themselves from one another. Don’t forget, kids: We are the good guys – and gals – so let’s try not to stage a ritual disembowelment of our potential nominees.

Last but never least, we are thankful for our legions of loyal fans, who have played along with us this year here in the happiest little corner of the blogosphere. We are grateful to you for your devotion, your laughter, your input, and your love. Wherever you are today, may your feast be sumptuous and your journeys safe. Wherever you go, you are never far from Roxie’s World. Peace out and joy to you all, beloveds.
Posted by Roxie Smith Lindemann at 11:36 AM

Email ThisBlogThis!Share to TwitterShare to FacebookShare to Pinterest
Labels: holidays