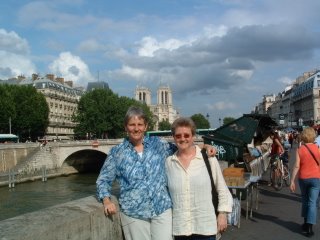 I've been helping my moms recover from their jetlag. They had a great time in Paris, which you can read about on their travel blog, M&M in Paris. Turns out Moose is a pretty good blogger. I'm thinking of giving her designer access to Roxie's World, now that I've forgiven her for the premature obituary she wrote for me when I had pancreatitis. Moose has a slight hysterical tendency, so her emotions run ahead of the evidence from time to time, but on the whole she takes good care of me and Goose and nobody makes us laugh like she does.

There's a lot on my mind right now. It's really hot for one thing, here in Washington and throughout the lower 48 states. That makes it hard for me to breathe, which makes my moms worry. Plus, they finally went to see An Inconvenient Truth, the documentary about my guy Al Gore's crusade on climate change, so now they also worry that our air-conditioning is going to destroy the planet. I worry about that, too, but dogs don't sweat. I need to be able to curl up next to my favorite register in the living room and bask in the artificial chill generated by the giant electricity hogs in our basement. I promise to help my moms and fans of my blog make small changes in their daily habits that can reduce energy costs and contribute to the fight against global warming, but I'm not budging from my register until night-time temperatures are below 70. In the meantime, though, I want all fans of my blog to pledge to see An Inconvenient Truth:

My broken heart is also heavy with concern for the deepening chaos of the situation in the Middle East. While some are making grim jokes about the apocalypse, I watch in horror as the "leader" of the "free" world stuffs rolls into his mouth and pops off about how Syria should just get Hezbollah to "stop doing this shit." Brilliant suggestion, Mr. President, and by the way there's a little chunk of butter in the corner of your mouth. Maybe if you just took this napkin and stuffed it in there. . . ? To some, this incredible Stupid Human Trick is further proof that Bush is a plain-spoken man who calls things as he sees them. To me, it's proof that Bush doesn't see nearly enough. His judgments are quick, shallow, dim--and dangerous. I can't imagine how you humans put up with such a lame leader of your pack.

Goose's home state of Texas seems to be doing penance for launching George Bush into American politics by staging one of the wackiest governor's races in the history of democracy. The Washington Post has a delightful profile today on Kinky Friedman's weird-yet-compelling bid to replace Gov. Rick "Good Hair" Perry. Given that the office of the governor in Texas is one of the weakest in the country, I think the Lone Star state might as well elect someone who has the guts to campaign in stinky shirts and to offer up this taped greeting to fans of the WNBA's Houston Comets: "Houston Comets basketball -- it's not just for lesbians anymore!" Moose liked that one so much that she nearly spit her coffee across the breakfast nook. That's the kind of plain talk she admires. It's verbally quick but not at all shallow. It names a truth that is ordinary yet in some ways discomfiting. It breaks a silence that ought to be broken and creates possibilities for laughter and connection across lines of difference without scapegoating anyone. George Bush doesn't know a word of that plain-spoken language.
Posted by Roxie Smith Lindemann at 10:19 PM