Or, Things We Did While Not Attending MLA 2012

Dr. Crazy went and so did Undine, but for the first time since 1995 neither of the English profs of Roxie's World attended the annual convention of the Modern Language Association, which concluded yesterday in the highly caffeinated city of Seattle. We're huge fans of the organization and its annual shindig but opted out this year because we weren't giving papers or shopping book manuscripts or serving on search committees and therefore couldn't quite justify the time and expense of a cross-country trip. So, what'd we do instead?

We burrowed in. Hunkered down. Laid low.

We ran a little. Walked a little. Finally tried Zumba. (Verdict? Not sure yet. Further research will be necessary, but Moose is not convinced her cardiovascular health requires quite that much hip action. She also recalls, however, that she felt similarly skeptical after her first aerobics class, once upon a time in the 80s.)

We toiled happily away on the kind of work that is hard to do when classes are in session and the calendar is a multicolored vortex of obligations. Goose had a 2-day team meeting for one of her electronic projects. Moose shifted into cruise-director mode to hammer out the details for the upcoming celebrations of her queer studies program's tenth anniversary. (I know: ten years of queering the turtle! Can you stand it? Click here for some of the scoop on what's in store. Details coming soon.)

Oh, and we watched us some basketball, because our fifth-ranked Lady Terps needed us to make sure they got through the weekend with their perfect record in tact. Fine, sophomore forward Alyssa Thomas helped, too, with her 24 points in Friday's heart-stopping comeback against Georgia Tech and her buzzer-beater that put Sunday's road game against Carolina into overtime, but we know that our passionate devotion helped carry the mighty women of Maryland to 16-0. 16-0!!!

After the haircut (the aforementioned depilation), Moose was hungry and so took herself to lunch. She had tapas. And a glass of white wine. It was Friday. She had gone for a run. Tapas is the perfect way for Lifestyle Adjusters to dine well without having to declare PointsPlus bankruptcy. She had a shredded cod salad, because a friend whose judgment she trusts says that if cod is on the menu you should always order it. She was not disappointed. 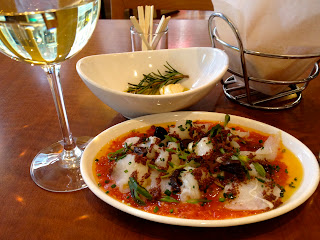 Then she went to a museum, because it was there. And there is a Gertrude Stein show she's been meaning to see for months but hadn't yet and now it's about to leave town, so she finally popped in. It's not the bestest exhibit ever, despite the forthright documenting of Stein's sexuality and her relationship with Alice B. Toklas and some marvelous images of the two women and their dog Basket, but it's well worth seeing. Moose was pleased to be able to snatch a pic of Jo Davidson's massive terra cotta sculpture of Stein, which she likes to think of as the precursor to the bronze Thinking Woman she brought home with her from New Mexico a couple of years ago. 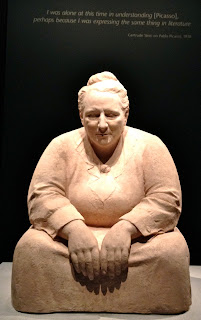 What else did we do while not schmoozing, boozing, and cruising at the MLA? We watched Homeland, all 12 white-knuckle, Claire Danes-ilicious episodes. The show strains credulity in precisely the ways our pal Jill Dolan blogged about in November (before the season had ended) and its finale is vexing in all the ways David Haglund and June Thomas discuss in Slate. Nonetheless, the writing (if not the plotting) and the performances make Homeland riveting to watch. It's a fraught and fascinating piece of post-9/11 cultural work that deftly probes the psychic costs of living with and in the massive state (in)security apparatus that took hold in the United States in the wake of the fall 2001 attacks. Danes plays Carrie Mathison, a CIA officer haunted by the feeling that she missed something on 9/11 that might have thwarted the attacks. Damian Lewis plays Nicholas Brody, a Marine sergeant who was held captive by Al-Qaeda for eight years and has just been released and returned home. Carrie believes he was turned while in captivity and is now part of a plot to attack the U. S. Much of the thrill of this taut, smart thriller is in watching the dynamics of the Mathison-Brody relationship and trying to figure out who is manipulating whom and to what end. How much of what happens between them is personal and how much is a matter of each working to advance the goals of their competing missions? We don't want to give anything away. Go watch the show if you can. Then come back here prepared to discuss Homeland's complex racial/sexual/religious politics and the burning question of whether Claire's electroshock therapy will erase the crucial piece of evidence she recognized in that last moment before the big buzz jolted her brain. Hurry! We are dying to have this conversation with you!

One more thing we did while not attending the MLA? Moose took a lot of pictures with her new iPhone 4S, which is, as the hype suggests, equipped with a camera so good you might be tempted to stuff all your old point-and-shoots in the back of some closet. Both photos above were taken with her fun new toy, as was the one below, which we offer by way of returning to the theme of quietness and winter rest with which this post began. Here's hoping you've found such time at the beginning of this brave new year. Peace out, my pretties, and, again, a very happy new year to you and yours. 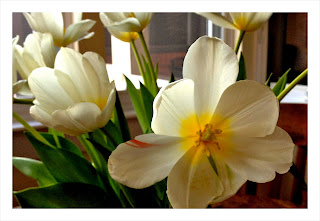